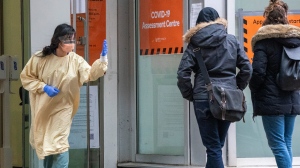 Ontario is reporting more than 1,200 new cases of COVID-19 today, the highest daily case count logged over the past week.

After three consecutive days of fewer than 1,000 new infections, provincial health officials confirmed 1,250 new cases of the disease caused by the novel coronavirus today, up from 994 on Thursday and 958 on Wednesday.

Another 22 virus-related deaths were confirmed over the past 24 hours, the highest single-day death toll since last Friday, when 28 deaths were reported. Week-over-week, the seven-day death average has declined by 1 to 15.

The province says 64,748 tests were processed over the past 24 hours, resulting in a test positivity rate of 2.3 per cent, on par with the rate reported one week ago.

An estimated 643 people infected with COVID-19 are receiving treatment in Ontario hospitals, including 280 in intensive care. According to the province, there were 683 COVID-19 patients in hospital seven days ago and 284 in the ICU.

The province reported 155 more cases of the B.1.1.7 variant today, bringing Ontario's total number of confirmed cases of the strain to 799.

Another 35,886 doses of a COVID-19 vaccine were administered in Ontario over the past 24 hours, a new record for the province.

The Ontario government will announce today whether restrictions can be eased in some of the province's COVID-19 hot spots.

Strict lockdown measures are still in place for Toronto, Peel Region, and the North Bay Parry Sound District health unit due to higher levels of transmission and trepidation over how variants of concern are circulating in the community.

The medical officers of health in both Toronto and Peel Region have asked the province to place their local public health units in the grey zone of the tiered reopening framework. That would allow all non-essential retail stores to reopen to customers with reduced capacity starting next week. It would also mean that stay-at-home orders would be lifted and outdoor gatherings of up to 10 people would be permitted once again. In-person dining is still not permitted in regions in the grey zone of the colour-coded framework and gyms, hair salons, and other personal care services must remain closed.

Mayor John Tory told CP24 on Friday that he believes the province will accept the city's recommendation and place Toronto in the grey zone.