$1.6B to flow to Ontario municipalities this fall; Toronto to get $404M to bolster pandemic-hit TTC 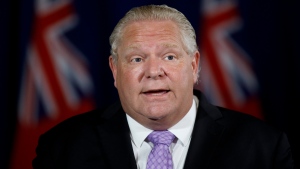 The provincial government is providing a clearer picture of how it plans to spend $4 billion earmarked to help Ontario municipalities that have been hard-hit by the COVID-19 pandemic.

The government said Wednesday that it will provide Ontario’s municipalities with up to $1.6 billion as part of the first round of emergency funding under the Safe Restart Agreement with the federal government.

Of that money, $695 million will help municipalities address operating pressures related to the pandemic, $660 million will support transit systems in 110 municipalities, and $212 million provided through the Social Services Relief Fund will help vulnerable people find shelter.

The government said the $695 million portion of the funding will be allocated on a “per household basis” and will be shared 50-50 between upper and lower tier municipalities.

Under the Safe Restart Agreement with the federal government, up to $2 billion is being provided to support public transit — $1.22 billion from Queen’s Park and $777 million from Ottawa. More of that money will be available in Phase 2, the government said.

The government also said that another $695 million in additional funding will be available to municipalities in Phase 2 after municipalities provide the province with details of the financial pressures they face.

Toronto to get at least $400 million to help with transit

Speaking shortly after the announcement, Toronto Mayor John Tory lauded the funding and said that he has been told by Transportation Minister Caroline Mulroney that Toronto will receive $404 million of the transit money in the first phase to help fill a gaping hole in the city’s finances.

“The preliminary reports from city staff and just taking a look at it within the context of what we had asked for is that it will help our transit system and go a very long way toward helping our operating budget for city services which was heading toward a very significant deficit,” Tory told reporters at a news conference.

He said allocating the money according to transit ridership was key to helping the city recover from the devastating hole that COVID has left in its finances.

“The fact that the transit funding we will receive is based on ridership is crucial for our city and the TTC as the operators of by far the biggest transit system in Ontario and in the country,” Tory said.

Even after finding some $500 million in savings and efficiencies, the city is starting down a $1.3 billion shortfall in its operating budget this year. Much of that shortfall is the result of plummeting revenue at the TTC due to low ridership.

At the same time, the city has not been able to greatly reduce service because doing so would make it impossible to maintain physical distancing on board transit. While ridership has crept back up as more spaces have reopened, it remains at around 35 per cent capacity across the system – well below normal levels.

Tory called the first round of transit funding “a very strong down payment for our transit system” and said the TTC will be key to a safe restart and a strong economic recovery.

By law, Ontario municipalities are not allowed to run operating deficits and the city has been contemplating sweeping cuts to services and selling off city assets in order to balance the books in the wake of the financial disaster.

Tory has loudly been lobbying the federal and provincial government for months to provide timely relief for municipalities and had warned that service cuts could start this summer if no funding was forthcoming from the higher levels of governments.

“What we had going just a few weeks ago was what amounted to a four-alarm fire in terms of the impact that COVID-19 has had on our finances and we called the people we needed to call to get that help in fighting that fire, namely the Government of Ontario and the Government of Canada and they have responded to many discussions we’ve had over time,” Tory said.

“All of those people we have been directly involved with in all of these discussions over several months and I’m glad that we are seeing it come to fruition now,” Tory said.

“We know that what is happening today and in the coming weeks is going to go a long way to resolving the issues that we have been bringing to public attention.”

It is not yet clear to what extent further measures will be required by the city to balance the books. The city manager is expected to present a detailed report to city council in the coming weeks to province an updated snapshot of the city’s finances in light of the funding.