19-year-old dies after stabbing outside of Oshawa bar 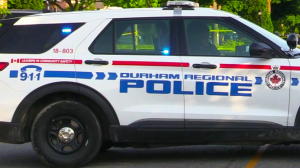 Durham Regional Police cruiser is seen in this undated photo.

A 19-year-old woman has died after a stabbing outside of an Oshawa bar last weekend.

Emergency crews were called to the area of Park Road South and Malaga Road around 2:30 a.m. on Dec. 4.

When officers arrived, they found a woman suffering from life-threatening injuries. She was rushed to a Toronto-area trauma centre, but later succumbed to her injuries.

Durham Regional Police identified the victim on Friday as Pickering resident Teil-lyn Cook. She is the region’s 15th homicide victim of 2022.

Police previously said a suspect fled in a black pickup truck before officers arrived; however no further descriptions have been provided.

Investigators say they are searching for witnesses or anyone who may have dashboard camera footage of the area from that day.