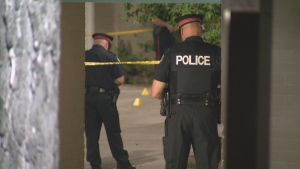 Toronto police are investigating a shooting in North York that sent a 22-year-old man to hospital with serious injuries.

A 22-year-old man is in hospital in serious condition after a shooting in North York on Thursday evening.

Toronto police Insp. Norm Proctor told CP24 that officers were called to a Toronto Housing Community complex in the area of Grandravine Drive and Driftwood Avenue just before 10 p.m. for reports of shots fired.

The man was transported to a trauma centre with serious injuries, Toronto paramedics said.

Proctor said the man appeared to have been targeted.

"He was targeted due to the fact that it would appear that these individuals chased him down and shot him," he said.

Proctor said they have located several shell casings all around the complex.

"We're still trying to figure out the actual chain of events as to what happened," he said, adding that investigators are working with Toronto Housing to view a surveillance video.

Police believe there are two suspects, but they have not released any suspect information at this time.

Police said, according to witnesses, the suspects fled the scene on foot heading south towards Sheppard Avenue West.

The canine unit, as well as the investigators from the guns and gang unit, are on the scene, assisting officers in searching for the suspects.

Police are appealing for any witnesses who may have seen what happened to come forward and contact them.

Toronto police are investigating a shooting in North York that sent a 22-year-old man to hospital with serious injuries.