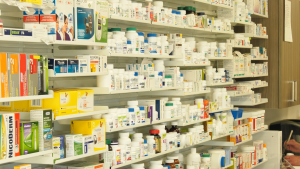 Prescription drugs at a pharmacy

Ontarians who rely on prescription medication will hopefully see an onerous COVID-19 precaution lifted by the end of June.

A 30-day limit on prescriptions was brought in by the Ontario government in the early days of the pandemic in an effort to prevent drug shortages. Spokespeople for Ontario's seniors community and the province's pharmacy industry say they expect the limitation will be lifted within the month, returning to the usual 90-day maximum by July 1.

“It's been a difficult policy,” said Justin Bates, the chief executive officer of the Ontario Pharmacists Association. “We stand by the policy, we think it was the right thing to do, but I think everybody's hopeful that we can get back to 90 days and to a normal cycle of quantity.”

Bates said that before the pandemic even began there were supply chain issues for pharmacists, with the manufacturers of key ingredients in China and India unable to produce necessary quantities.

That shortage was exacerbated in the early stages of the novel coronavirus pandemic, with hospitals filling more orders and individuals trying to stock up, just as there were runs on other essential items such as toilet paper.

As a result, several provinces imposed the 30-day limit, with Ontario one of the final provinces yet to return to the 90-day norm.

“Ontario has to be careful because it is the biggest province and the supply issues will only be exacerbated here,” said Bates, who added the province can learn from other jurisdictions. “If there's been no risk to the supply (elsewhere), then it makes it a decision that we know will be responsible.”

Even with the 30-day limit in place pharmacists in Ontario have struggled to fill orders.

According to Bates, 97 per cent of orders made by pharmacists to wholesalers are not completely fulfilled. He also said that studies have shown pharmacists' workload has increased by 24 per cent as they have to fill orders more often and address supply chain issues.

“Seniors take an average of four medications each with some taking upwards of 10. You can do the math, but the cost of his co-payments adds up quickly,” said Marissa Lennox, the chief policy officer of the Canadian Association for Retired Persons. “And this puts a big a pretty significant financial burden on someone who's living on a fixed income.”

An increased number of visits to the pharmacy also puts people vulnerable to the novel coronavirus at greater risk.

CARP, the OPA, and other groups advocated for an amendment to the rule to improve accessibility.

That lead to the provincial government announcing on May 13 that anyone using the Ontario Drug Benefit Program will not be required to pay any co-payment until July 1 for any prescription that is being dispensed in instalments.

Ontario's government also allowed for pharmacies to do deliveries or curbside pickups. The province also allowed that new Trillium Drug Program households can apply for an income reassessment to help reduce the financial burden for families during the outbreak.

Both Bates and Lennox said that they do not think this policy will be extended past July 1, since they expect 90-day prescription limits will be reinstated by then.

The advocacy group Action Canada for Sexual Health and Rights is also eager to see the 30-day limit come to an end, since it made it more difficult for people to get birth control or other contraceptives.

“We're also seeing a global shortage on alternative contraception like condoms,” said Laura Neidhart, the organization's director of communications and government relations. “So (the 30-day limit) is part of a pretty big umbrella of issues that are happening and impact on people's lives.”