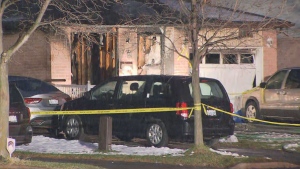 A 33-year-old man has been charged with first-degree murder following the death of a woman who was pulled from a burning home in Brampton early Friday.

Shortly before 4 a.m., Peel police and fire crews responded to a blaze on Martindale Crescent in the McLaughlin Road and Williams Parkway area.

“Upon arrival, we were made aware that there were six occupants that resided in this residence. Five of those occupants were located outside,” Const. Akhil Mooken said during a media briefing at the scene Friday morning.

Brampton Fire Chief Bill Boyes said crews found a female victim inside and removed her from the house.

The woman, believed to be 61 years old, was pronounced deceased on the scene. Police have not released her name.

Another occupant of the home, a 34-year-old woman, was taken to hospital with non-life-threatening injuries.

Police said the four other residents, a 71-year-old man and three children ages 11, 8, and four, did not suffer physical injuries.

A 33-year-old man was arrested in connection with the incident.

In addition to the first-degree murder charge, police said the man who has been identified as Helder Vertentes-Arruda is also facing five counts of attempted murder.

Police said the suspect and the occupants of the home are known to each other.

Neighbours told CP24 that the home is owned by a man and woman in their late 60s and that their daughter and her two young children were also in the home at the time of the fire.

Brampton Fire tweeted Friday morning that crews worked “under difficult conditions” to put out the fire.

“There was an aggressive interior attack. The crews did a tremendous job putting out the fire very quickly,” Boyes said at the media briefing.

The fire was later knocked down. There appears to be significant damage to the inside of the home.

The cause of the blaze is unknown. The Office of the Fire Marshal has been notified about the incident.

Anyone with information or surveillance video is asked to contact police or Crime Stoppers anonymously.

Two investigators and a supervisor from @ONFireMarshal have been dispatched to support @PeelPolice & @BramptonFireES determine the cause of this fire. Media inquires should be directed to Peel Police. https://t.co/FMHrD6TGeS