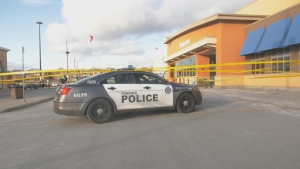 Traffic services are investigating a collision at a North York parking lot that injured three pedestrians.

A woman was critically injured after she struck by a vehicle at a parking lot in North York.

It happened in the area of Lawrence Avenue West and Keele Street just before 1 p.m.

The victim was pinned under the vehicle and was freed by emergency services, police said. She was taken to a trauma centre with life-threatening injuries.

A second person, a woman in her 30s who was pushing an infant in a stroller, was also struck.

Another woman in her 30s and a 17-month-old child, who was in a stroller at the time of the collision, were assessed by paramedics on scene and were released.

The driver of the vehicle remained on the scene.

Anyone with information is asked to contact Traffic Services or Crime Stoppers.

Traffic services are investigating a collision at a North York parking lot that injured three pedestrians.