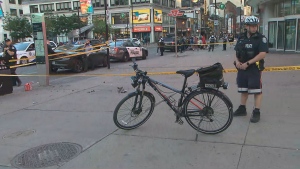 Police are on the scene of a stabbing outside Eaton Centre on Tuesday, June 28, 2022.

A 40-year-old man has been charged after a stabbing in downtown Toronto left a man critically injured on Tuesday.

The incident happened outside CF Eaton Centre at Yonge and Dundas streets before 7:30 p.m.

Police said two men were involved in a verbal altercation when one of them stabbed the other.

The victim was taken to the hospital with life-threatening injuries. On Wednesday, police said he was in stable condition.

The suspect, Toronto resident Akwasi Oppong-Nsafoah, was arrested subsequently after the incident and has been charged with two counts of assault with a weapon and aggravated assault.

He appeared in court on Wednesday morning.

Police continue to ask anyone with information about the stabbing, including those driving in the area at the time with dash cam footage, to call investigators at 416-808-5200 or Crime Stoppers anonymously at 416-222-TIPS (8477).