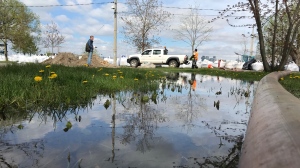 Workers are shown sandbagging on the Toronto Islands on Friday morning. (Sean Leathong)

The city has placed 5,000 new sandbags on the shores of the Toronto Islands over the last 36 hours amid an ongoing risk of flooding.

Coun. Joe Cressy says crews have been hard at work to protect the islands as water levels continue to rise.

The Ward 10 councillor said the city will continue to load the island with more sandbags as well as install four new pumps, bringing the total number of pumps to 28.

He added that officials expect water levels to continue to rise for the next seven to 10 days.

“This remains a stressful time for island residents, businesses, and city staff. Our commitment remains to keep the Islands both open and safe,” Cressy tweeted. “We will mitigate and manage this year, and going forward we will look to invest in long-term climate change mitigation measures.”

As of Friday, the water levels in Lake Ontario sat at 75.85 metres, which is only eight centimetres lower than the highest daily level that was recorded during the devastating floods in April 2017. The 2017 flooding prompted city officials to close the island to visitors for months during the summer.

Last week, residents of the island feared they were in for a repeat of two years ago when they were hit with flooding once again.

On Thursday night, gusty winds created large waves in the harbour and water breached the sandbags on the north side of Ward’s Island.

Significant flooding was reported along streets and near some homes. The damage has been minimal thus far.

Mayor John Tory previously said the city plans to sit down with residents and businesses to figure out what long-term steps should be taken to protect the islands.