7 Scarborough schools briefly placed in hold-and-secure after man was seen with gun in area: police 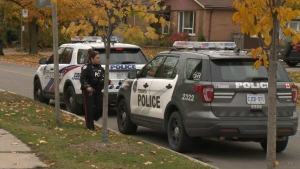 Seven Scarborough schools were placed under hold-and-secure orders on Tuesday afternoon as police searched for a suspect reportedly seen in the area with a firearm.

The orders were placed on Cliffside, Chine Drive and John A Leslie public schools, of the TDSB, and St. John Henry, Immaculate Heart, St. Teresa Shrine and St. Agatha of the TCDSB.

A teen reportedly spotted a man with a gun at a bus stop in the area and reported it to a school supervisor, according to police.

No injuries were reported and the suspect has not been located, however the investigation is ongoing, police say.