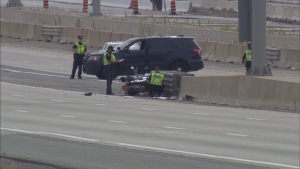 Provincial police are investigating a fatal motorcycle crash on Highway 401 in Mississauga.

An 82-year-old London man is dead after a motorcycle crash on Highway 401 in Mississauga Sunday afternoon.

Emergency crews were called to the eastbound lanes of the highway at Hurontario Street at around 3 p.m.

Ontario Provincial Police Sgt. Kerry Schmidt said a motorcyclist was in the left lane of the collectors and appeared to be trying to access the express lanes when he hit a barrier end treatment that separates the two lanes.

As a result, the victim was ejected from his motorcycle, Schmidt said.

When officers arrived on the scene, the motorcyclist was found without vital signs and was transported to the hospital, where he later died of his injuries.

The eastbound lanes of the highway were closed between Mavis Road and Hurontario Street for approximately two hours. The lanes have since reopened.

The collision reconstruction team is investigating.

Provincial police are investigating a fatal motorcycle crash on Highway 401 in Mississauga.