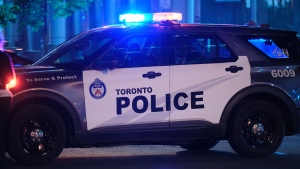 An 89-year-old woman critically injured after being struck by a vehicle in Etobicoke last week has died, police say.

On the evening of Aug. 3, emergency crews were called to Royal York Road and Stanley Avenue for a collision.

When they arrived, officers and paramedics located a female pedestrian suffering from life-threatening injuries.

According to police, a vehicle travelling south on Royal York Road was turning left onto Stanley Avenue when it struck the woman.

She was rushed to the hospital, where she died on Tuesday, police say.

Meanwhile, the driver of the vehicle remained at the scene, police say, adding that the investigation into the collision is ongoing.