A look at how some historic Canadian hurricanes compare with Fiona 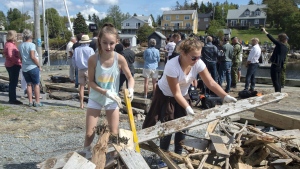 Madelyn Watts, left, and Angelina Taylor clean up debris on the government wharf as Ralph Goodale, minister of Public Safety and Emergency Preparedness and Harjit Sajjan, minister of National Defence, hold a news conference in the background in Herring Cove, N.S. on Tuesday, Sept. 10, 2019. Hurricane Dorian brought wind, rain and heavy seas that knocked out power across the region. THE CANADIAN PRESS/Andrew Vaughan

As people in Atlantic Canada prepared Friday for the imminent arrival of Fiona, some weather experts were studying past hurricanes and storms to gain insight on what could be coming.

Chris Fogarty, lead meteorologist and program manager at the Canadian Hurricane Centre, said meteorologists often like to look back at historical events when preparing forecasts.

"We want to see if we can compare (an incoming hurricane) with past events to give people an idea of what we're going to see," said Fogarty.

Fogarty offered thoughts on some of the notable hurricanes and post-tropical storms that have made landfall in Canada and what impact they had.

Hurricane Dorian, a storm that made landfall in Atlantic Canada on Sept. 7, 2019, was "similar in a sense" to Fiona, said Fogarty, in that it was a hurricane that transformed into a nor'easter. The impacts of Dorian were made worse by soaking rains and powerful winds from tropical storm Erin a week earlier, according to Environment Canada records.

Dorian was not as intense as hurricane Juan in 2003, but the winds, rain and waves it brought destroyed more physical infrastructure in Nova Scotia than any storm had in the past. It was the single most damaging storm in Nova Scotia Power's history, according to Environment Canada records, with 80 per cent of customers affected. Dorian was still much weaker than what Fiona is expected to be, said Fogarty.

Environment Canada archives list this storm as the worst of tropical origin to hit Newfoundland in 75 years. It brought excessive rainfall and winds reaching up to 172 km/h that toppled trees, caused power outages and structural damage to buildings, and brought widespread flooding.

Hurricane Fiona is likely to be similar to Igor, said Fogarty, which was a "very powerful storm."

"(It had) a lot of rain, strong winds, " he said. "But (meteorologists are) not seeing the numbers, some of the computer model numbers with Fiona, that we saw with Igor in 2010. That's to say that (Fiona) does look like it's going to be worse than even (Igor)."

This "storm of the century" hit Halifax directly on Sept. 29, 2003, according to Environment Canada. A paramedic in Halifax was killed when a tree was blown onto his ambulance. An estimated 50 to 100 million trees came down in Nova Scotia in a two-hour period. Environment Canada says hurricane Juan was "the most damaging storm in modern history for Halifax," when measured by the widespread tree blowdowns, power outages and damaged homes.

"The wind speeds in Juan, they were right around what we're predicting with Fiona," said Fogarty. "But with Fiona, a larger area will be impacted .… Juan was probably a tenth the size of what Fiona is."

Hurricane Edna formed southeast of Barbados on the afternoon of Sept. 2, 1954, and made landfall in New Brunswick as a Category 1 on Sept. 11, according to Environment Canada. It weakened to tropical storm strength over southern Quebec and Labrador before heading out to sea. With wind speeds of up to 160 km/h, it killed one person in Nova Scotia and injured numerous others.

"I would say that we probably have to go back to at least 1954 to envision some of the impacts that we'll likely see (with Fiona)," said Fogarty. "Hurricane Edna was in 1954 and it produced wide swaths of forest blowdown in Nova Scotia and Prince Edward Island."

Also referred to as the Great Nova Scotia Cyclone, this storm swept across Cape Breton Island on Aug. 25, 1873, and killed as many as 500 people, mostly sailors, according to Historica Canada. Environment Canada says some historical records indicate 100 more died in Newfoundland, and as many as 1,200 boats and 900 homes were also lost.

"It had properties and a track that might be similar to Fiona," said Fogarty. "There was incredible surge in the Gulf of St. Lawrence, P.E.I. was (also) devastated, which is likely what we're going to see with Fiona. To be honest, this 1873 storm, the Great Nova Scotia Cyclone, is the one that stands out in my head as (having) perhaps a similar track and impact."

More than 4,000 mariners were lost, mostly off the coast, in the Independence Hurricane of 1775, according to Environment Canada. The storm hit the then-British colony of Newfoundland. Department archives say it's been speculated the storm was a turning point in the American Revolution because most of the lives lost were British sailors.

It was "a terrible storm," said Fogarty, that "may have" had all the same features as Fiona, though there is little data reaching that far back, and information mainly comes from ship reports and early records.

"It was thousands of fatalities because there were no warnings back then," he said. "But some of the reports from that storm (showed) immense storm surge in eastern Newfoundland."