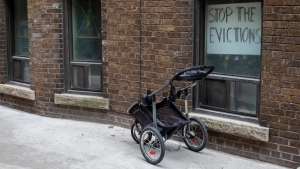 A sign hangs in the window of a west Toronto apartment on Thursday March 19, 2020. THE CANADIAN PRESS/Chris Young

TORONTO - Ontario tenants' rights advocates are voicing concerns over a new bill they say will make it easier for landlords to obtain evictions once the COVID-19 crisis eases.

Several advocacy groups say Bill 184, also known as the Protecting Tenants and Strengthening Community Housing Act, would provide a number of new avenues for landlords to both evict and collect unpaid rent from current and past tenants.

The changes would apply retroactively to when the province first declared a state of emergency over the COVID-19 pandemic.

Under current law, all disputes over evictions and rent in arrears must be heard by the Landlord and Tenant Board, some of which result in rent repayment plans.

Bill 184 would allow for landlords to cut the board out of the equation and offer tenants their own repayment plan.

If a tenant refuses the landlord's offer, they can still take their matter before the board, but some critics and legal analysts say it's more likely that vulnerable tenants will sign onto shady repayment plans because they don't know how to navigate the system.

“The more complex the process, the less likely people will be able to avail themselves,” says Caryma Sa'd, a Toronto landlord and tenant lawyer.

Sa'd notes the bill also permits the board to grant evictions if the tenant rejects a repayment plan, which could allow landlords to force tenant out by simply offering an unreasonable repayment plan and then claiming the tenant's refusal of the plan as grounds for eviction before the board.

Others have noted the bill would allow landlords to evict without a hearing if a tenant fails to fulfil the repayment plan.

Suze Morrison, Ontario's NDP tenant rights critic, said thousands of tenants are worried about losing their homes after falling behind on rent due to the pandemic.

“While landlords may not be able to execute evictions just yet, they haven't stopped threatening tenants that they're coming,” she said in a statement.

In early June, the Toronto Foundation released a brief that estimated thousands in Toronto were struggling with or had missed rent payments, and warned for the potential of 'unprecedented levels of homelessness' when the moratorium on evictions is lifted.

And the Centre for Equality Rights in Accommodation said the bill, if enacted, would have a particularly negative impact on vulnerable groups such as low-income families and newcomers.

A spokeswoman for the minister of municipalities and housing said the proposed legislation would “strengthen protections for tenants and make it easier to resolve landlord and tenant disputes.”

The bill also increases maximum fines to discourage unlawful evictions, and allows the Landlord and Tenant Board to order up to a year's rent in compensation to tenants for eviction notices issued in bad faith, Julie O'Driscoll said in an email.

“When rent is overdue, we want to encourage landlords and tenants to work together to come up with repayment agreements - rather than resorting to evictions,” she said.

The bill has passed second reading and was brought before a legislative committee this week.

This report by The Canadian Press was first published on July 3, 2020.