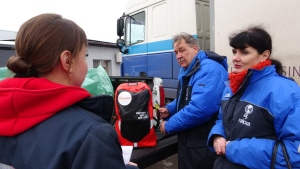 Dr. Christian Carrer and his partner Tetyana Grebenchykova, heads of the organization AICM, give a special emergency kit bag for first respondents to Paulina, an emergency room manager in the region of Balakliya, recently liberated by the Ukrainian army, on Friday Nov. 25, 2022. THE CANADIAN PRESS/Patrice Bergeron

As the Toyota Tundra following a tractor trailer loaded with humanitarian aid heads into dangerous territory in eastern Ukraine, "Promiscuous" by Nelly Furtado and Timbaland plays over the speakers.

The small convoy transporting 20 tonnes of medical supplies is headed for Balakliya in a part of the country that was retaken by the Ukrainian army in September after six months of brutal Russian occupation. Their mission to help the devastated region crosses areas where Russian shelling continues. In Kupiansk, not far from Balakliya, shells continue to rain down.

At the wheel of the Tundra last Friday was Dr. Christian Carrer, a pediatrician from France. With his partner Tetyana Grebenchykova, he runs the Association internationale de coopération médicale, a non-governmental organization that receives support from the Canada-Ukraine Foundation and the Ontario government.

It will take the vehicles, which also include a minivan ahead of the tractor trailer, five hours to travel from a warehouse in Poltava to Balakliya, a distance of barely 200 kilometres. The roads are pockmarked from fallen bombs, and there are frequent stops at military checkpoints on guard against Russian infiltration.

The strapping pediatrician with the face of an old adventurer has been on the ground since 2014, helping people in the Donbas region after it was invaded by the Russians. Last January, he suspected Ukraine's menacing neighbour was planning something.

"There were strange gatherings and constant provocations," Carrer said as he drove. "Everyone knew that clearly, something was going to happen."

His organization started ensuring various supplies, in particular bandages, were positioned ahead of the feared assault. The last hospital received its delivery on Feb. 24, he said, the day the Russians launched their war.

"The people funding us had confidence in us because we sensed the attack," he said.

Canada is the third most generous contributor to his group, which has also drawn donations from French, American and British sources.

The organization is well stocked and knows the terrain, and it focuses its aid in a few administrative regions in the northeast of the country. It has more than 800 items available, general or specialized medicines that hospitals and pharmacies in disaster zones can order.

Even in regions that have officially been liberated, the needs remain desperate.

The road crosses sprawling plains, and in one village after another, homes have been destroyed and gas stations and other businesses are shuttered. Crops remain unharvested in the fields. The tires make a constant purring noise as they drive over asphalt perforated by constant tank traffic.

Signs of the suffering and destruction of war are everywhere, and residents have little left to survive on. The occupiers emptied pharmacies and pillaged hospitals.

The convoy passes Chuhuiv, a municipality where the Association internationale de coopération médicale positioned medical supplies ahead of the war but that was later occupied. "The Russians took everything," says Carrer, who has lived in Ukraine since 2006.

He describes the health condition of those who lived for weeks in shelters as pitiful, looking like "zombies." Some are even losing their teeth, and he said visiting physicians are shocked by what they find.

As a pediatrician, he is especially worried about the state of pregnant women, young mothers and their children: a large part of that day's delivery is destined for them.

Once in Balakliya, a desolated city with some buildings completely gutted, the aid valued at $4 million is unloaded in an old warehouse. It will later be distributed among eight municipalities in the area. A small welcoming committee includes the administrative head of Izyum district to the south, Stepan Maselski.

"This aid is very important because we are still at war," Maselski said in an interview. "The invader destroyed our infrastructures. Just two days ago, we didn't have electricity or water. The occupation was painful — no medicine, no medical supplies, no good food."

A forklift empties pallets from the tractor trailer, containing cases and cases of medicine to treat chronic illnesses, epilepsy and heart problems, anesthetics for surgeries, surgical equipment, bandages, gloves, stethoscopes and diapers, among other items. There is also baby formula because infant malnutrition is widespread, Carrer says.

"Often women who give birth have trouble nursing because of the stress and the situation," he explained. He said Ontario has provided vitamins, and the impact was practically miraculous.

There are also supply kits for those left homeless and even boxes of pet food, which is in short supply.

A special big red bag, which resembles an insulated delivery bag, is handed to Paulina, a medical official who intervenes in the provision of urgent care across the region. It is a kit conceived by doctors in California to treat people in war zones, whether for injuries caused by a landmine or for heart attacks. Paulina says the supplies are of superior quality and they are badly needed.

Suddenly the unloading operation is halted when the forklift breaks down. But the Ukrainians are creative: they tow the old forklift out of the way with a tractor — like their compatriots were often seen doing with Russian tanks on viral videos — and build a wobbly wooden ramp to complete the unloading.

Counting on Ukrainians' ability to adapt, Carrer's group has also delivered large numbers of warm blankets as well as small wood-burning stoves manufactured in the Poltava region for residents who have no way to heat their homes due to power outages.

Carrer says there are complex  reasons why the Ukrainian government is struggling to provide basic services in liberated territories. For one thing, he explains, the budget for health spending was cut by about one fifth to fund the war effort. And the annual provision of equipment and funding for the health system comes in February or March, which was when the Russians invaded. The number of refugees has also drained local resources.

"The needs are enormous in all the hospitals," he says. "And now it's serious. We see hospitals that are at the end of their tether. We used to deliver two boxes, and now we deliver whole pallets, basic supplies like plaster, gloves, cotton."

Night falls quickly, and it is cold. The rig is empty, and it is time to leave so the group can make it through all the checkpoints on the way back to Poltava. Carrer knows his group will likely have to return soon with another load.

“Either a good soul is there to help, or they'll call us back in a month .... We are the first to help, and perhaps the last to help.”

— Patrice Bergeron is a Quebec-based journalist with The Canadian Press. In addition to two decades of political and general news experience, he was a CP war correspondent in Afghanistan in 2009.