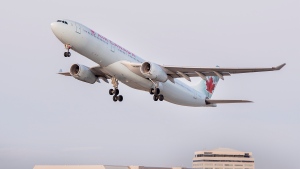 An Air Canada plane takes off from Montreal Trudeau Airport in Montreal, Sunday, December 5, 2021, as the COVID-19 pandemic continues in Canada and around the world. THE CANADIAN PRESS/Graham Hughes

MONTREAL - Air Canada is cutting more than 15 per cent of its scheduled flights in July and August as airports face lengthy delays and cancellations amid an overwhelming travel resurgence.

The move will see 154 flights per day on average dropped from the airline's schedule - already operating at 80 per cent of pre-pandemic levels - affecting hundreds of thousands of passengers. The flights link mainly to its Toronto and Montreal hubs, and are all on domestic or Canada-U.S. routes, the company said in an email Wednesday.

“This was not an easy decision, as it will result in additional flight cancellations that will have a negative impact on some customers,” chief executive Michael Rousseau said in a statement.

“But doing this in advance allows affected customers to take time to make other arrangements in an orderly manner, rather than have their travel disrupted shortly before or during their journey, with few alternatives available.”

The slimmed-down schedule is marked mainly by frequency reductions that affect evening and late-night flights on smaller planes, Air Canada said. International flights remain unaffected except for some timing changes to reduce flying at peak times and even out passenger flow.

Comparing backed-up airports and flight schedules to other global industries where companies “are struggling to restart, unclog supply chains and meetpent-updemand,” Rousseau said Air Canada foresaw much of the strain now weighing on global aviation networks.

“Yet, despite detailed and careful planning, the largest and fastest scale of hiring in our history, as well as investments in aircraft and equipment, it is now clear that Air Canada's operations too have been disrupted by the industry's complex and unavoidable challenges,” he said.

“The result has been flight cancellations and customer service shortfalls on our part that we would never have intended for our customers or for our employees, and for which we sincerely apologize.”

Problems escalated across the airline sectorthis month, despite a federal hiring spree of security and customs officers and a pause on randomized COVID-19 testing, which had caused bottlenecks for international arrivals.

A majority of domestic flights to Canada's busiest airports were delayed or cancelled over the past week as the effects of an overloaded international network continued to ripple across the country.

Some 54 per cent of flights to the four largest airports were bumped off schedule in the seven days between June 22 and 28, according to analytics firm Data Wazo.

Three Air Canada routes will be temporarily suspended between Montreal and Pittsburgh, Baltimore and Kelowna, B.C., and one from Toronto to Fort McMurray, Alta., the carrier said.

Before the changes it operated about 1,000 flights a day on average, the Montreal-based company said.

Airlines and the federal government have been scrambling to respond to scenes of endless lines, flight disruptions, lost luggage and daily turmoil at airports - particularly at Pearson - a problem the aviation industry has blamed on a shortage of federal security and customs officers.

But Philippe Rainville, CEO of Montreal's airport authority, said in an interview Wednesday that many of those hires - 900-plus for security screeners - are now in place, yet delays and cancellations persist. Flight disruptions abroad play a big role in continuing to knock domestic schedules off course, he said.

“It's a consequence of the delay in international flights,” he said. “To delay a domestic flight is a lot easier because flying to major hubs in Europe, the slots are very tight. Domestically, we've got a lot more leeway.”

Before Air Canada's announcement, Rainville expected passenger volumes through Montreal to hit 80 per cent of 2019 levels, though peak times are already on par with three years ago. The airport was planning for about 16 million travellers versus 20.3 million in 2019.

Kinks in one part of the air travel pipeline can snarl others, with overflowing customs areas stopping flight crews from disembarking, for example, or a lack of airline customer service agents exacerbating delays.

Luggage is an especially sticky problem, with a shortage of baggage handlers to shuttle suitcases from late arrivals to connecting planes amid last-minute gate changes.

An Air Canada plane takes off from Montreal Trudeau Airport in Montreal, Sunday, December 5, 2021, as the COVID-19 pandemic continues in Canada and around the world. THE CANADIAN PRESS/Graham Hughes