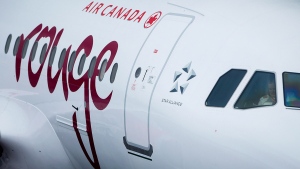 An Air Canada Rouge plane prepares for a flight to Las Vegas at Vancouver International Airport in Richmond, B.C., on Monday, April 28, 2014. (THE CANADIAN PRESS/Darryl Dyck)

MONTREAL - Air Canada says it will pause all operations of its Rouge aircraft indefinitely and lay off 80 employees starting Feb. 8.

The airline's announcement comes as Canadian airlines suspend all flights to Mexico and the Caribbean at the request of the federal government.

The company says its flights to the region were primarily operated by Rouge.

Air Canada announced layoffs of around 1,700 employees in January, when they saw a drop in bookings because of a new requirement that travellers entering Canada show proof of a negative COVID-19 test.

In addition to the most recent flight suspensions, Prime Minister Justin Trudeau announced a series of additional travel restrictions on Jan. 29, including a requirement that entrants to Canada quarantine in hotels at their own expense.