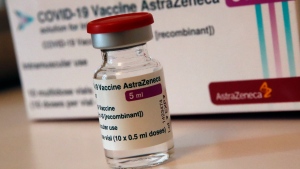 A vial of AstraZeneca vaccine is pictured in a pharmacy in Boulogne Billancourt, outside Paris, Monday, March 15, 2021. (AP Photo/Christophe Ena)

OTTAWA -- Alberta says it won't give out more first doses of the Oxford-AstraZeneca vaccine for the time being.

A spokesman for the provincial health department says the decision was made because there aren't any confirmed shipments of AstraZeneca coming, and the province only has 8,400 doses of it left.

As such, they will save what they have for second doses.

Alberta appears to be the first province to officially take AstraZeneca out of the offerings for first doses but it likely won't be the last. There are ongoing safety concerns for AstraZeneca but the decision is coming largely due to the practical realities of supply.

Pfizer and Moderna are sending more than enough to vaccinate every Canadian with two doses.

Many provinces, including Ontario, are eagerly awaiting results of a clinical trial in the United Kingdom looking at giving a different vaccine for the second dose. That would allow people who got AstraZeneca first to be given Pfizer or Moderna for their second dose.

The first results looking at combining AstraZeneca and Pfizer could come this week and most health experts say the combination of vaccines may create an even better immune response.

AstraZeneca is potentially linked to a new blood clotting syndrome known as vaccine-induced thrombotic thrombocytopenia or VITT. The syndrome is extremely rare but can be fatal, and the real risk is still being determined.

The Ontario Science Table said Monday the reported incidents globally are between one in 26,000 and one in 127,000.

In Canada, at least 12 cases have been confirmed out of more than two million doses given. Three women have died.

The National Advisory Committee on Immunization says people at low risk of COVID-19 should wait until they can get a dose from Pfizer-BioNTech or Moderna.

Dr. Andrew Morris, an infectious diseases physician and director of the antimicrobial stewardship program at Sinai Health in Toronto, said given what we now know of the risk of VITT combined with greater supply of Pfizer and Moderna, and lower incidence of COVID-19 in most of Canada, the benefits of the AstraZeneca vaccine no longer outweigh the risks in most of Canada.

He said if COVID-19 hot spots in places like Toronto, Brampton, Winnipeg, and much of Alberta can't get enough doses of Pfizer or Moderna, then AstraZeneca still is a good choice there.

"Everywhere else, it no longer makes sense based on what we know, to give AZ vaccine," he said on Twitter.