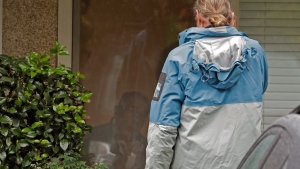 In this Friday, March 6, 2020 file photo, Gene Campbell, left, watches through his window as he talks with his son, Charlie, foreground, using a phone at the Life Care Center in Kirkland, Wash. In mid-March, Charlie, 61, tried his first online Alcoholics Anonymous meeting. His internet was shaky and he didn't get to speak. The meeting did not give him the peace and serenity he craved. “I’m a face-to-face kind of person,” he said. Still, he hasn't relapsed. (AP Photo/Ted S. Warren)

When the International Convention of Alcoholics Anonymous was cancelled to prevent the spread of COVID-19, it became clear the fellowship had to start getting creative.

The conference, originally scheduled for the first weekend of July, would have seen nearly 50,000 members meet in Detroit to share experiences and lessons in their shared struggles with addiction. But restrictions on public gatherings forced the cancellation of that event, as well as weekly meetings in countless communities.

"We just went, 'Oh my God, this is real. Like, this is really real,"' said one AA member, who is also the alternate general service delegate for Area 82, which serves Nova Scotia and Newfoundland and Labrador.

"We were hopeful that this wasn't going to be too long and then we got an email from General Service Office saying that the international world convention was cancelled," she said.

Alcoholics Anonymous groups often meet in legion halls, churches, or other public meeting spaces. Those buildings have been closed by public health officials across Canada to help the slow the spread of the novel coronavirus.

Finding alternatives to in-person meetings has been a challenge.

The teleconferencing app Zoom has become a popular alternative because it allows people to call in from a land line.

However, for the first few weeks of physical distancing, AA was posting the co-ordinates of its Zoom meetings online and making them open to the public, which led to several incidents of online "trolls" posting graphic photos in the chatroom or harassing participants in other ways.

Passwords have since become the norm. But in a decentralized organization where anonymity is a central tenet, it's hard enough to get the word out about online meetings, let alone passwords.

"I was in bed and my phone started ringing and it didn't stop ringing for about three hours because people were trying to figure out how to find passwords for meetings because we didn't have passwords the day before," said the AA member who, as a service delegate, had her number posted on the area website. "That was a little learning curve."

Another challenge is that AA works on the principle of attraction rather than promotion.

Members not only remain anonymous, but abide by the idea that the organization should have no opinion on outside issues. AA also never endorses or offers financial support or prestige to any outside organizations.

That makes it exceptionally difficult to announce that all meetings have moved online. Even for one member to be interviewed for this article, it required a vote by local members that then had to be approved by AA's General Service Office in New York.

In the Atlantic region, AA has reached out to doctor's offices, hospitals, and detox centres where addicts might wind up. Public service announcements have also gone out on community cable channels and radio stations.

The general service delegate says that to simulate the socialization of in-person gatherings, the Zoom meetings usually open 30 minutes early and people stay on long after the formal portion of the meeting is done.

"We miss hugging and handshakes. And, you know, Joe always brought cookies," she said. "But we're trying our best."