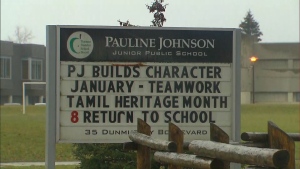 Pauline Johnson Junior Public School is seen in this photo.

An alleged attack against an 11-year-old girl where a man supposedly cut off her hijab while she walked to school last week, did not in fact happen, Toronto police say.

On Jan. 12, the girl told police that she was on her way to Pauline Johnson Junior Public School in Scarborough when a man dressed in black came up behind her. She said the suspect – described as an Asian man with a moustache -- pulled off the hood to her jacket and cut off her hijab with a pair of blue-handled scissors before fleeing the area.

Toronto police responded and said they were investigating the alleged incident.

However police said Monday morning that after a thorough investigation, they don’t believe the incident happened.

“There was an extensive investigation Friday and over the weekend and quite simply, investigators came to the conclusion, considering all the evidence they had, that what was described did not happen,” police spokesman Mark Pugash said.

Pugash declined to call the incident a hoax, but said police now consider the investigation closed.

“I think we did absolutely what people would expect, which is we don’t jump to conclusions. We work on evidence and we invested a lot of time and a lot of effort over a fairly short period of time,” Pugash said. “I think we owe it to everybody to examine particularly serious allegations in a detailed way and that’s what we did.”

No one was arrested and there are no charges pending on connection with the investigation, he said.

There was no indication from police or school officials as to why the girl would have made up the story if it did not happen.

The Toronto District School Board initially issued a short statement Monday saying they were thankful the assault never occurred and that they would not comment further.

However facing mounting criticism over the fact that the girl and her family were made available to the media Friday in a news conference at the school, the school board released a lengthier statement Monday afternoon explaining that they dispatched a spokesperson to the school after police tweeted about the incident.

“At no time did the TDSB call a press conference, however spokespeople from the TDSB and Toronto Police made themselves available to answer any questions,” TDSB spokesperson Ryan Bird said in the statement. “This was done inside the school due to the bad weather outside.

“After expressing concern that they were going to be approached by media outside while trying to leave, as well as a concern that no members of the community be subject to the alleged perpetrator, the family was asked if they would like to join the TDSB spokesperson as she spoke to media. The family members said they would speak to media and it was our understanding that this happened after, not before, they provided statements to police.”

Bird said the TDSB’s motivation for commenting on the incident “was only out of compassion, care, concern and support.”

On Friday, representatives from all levels of government issued statements decrying the alleged attack and rallying behind the girl.

In a statement Monday, Mayor John Tory said he will speak continue to speak out anytime there are allegations of hate or intolerance in the city.

“It is good to know that this event didn't happen,” Tory said in the statement. “We all must remain vigilant in the fight against hate, racism, bigotry, anti-Semitism and Islamophobia to make sure our city remains an inclusive place.”

A statement from Prime Minister Justin Trudeau’s Press Secretary said “we are thankful and relieved this incident did not take place.”

The statement called attention to “an unfortunate pattern of increased hate crimes in past months directed towards religious minorities, particularity towards women.”

We need to take this issue extremely seriously as this pattern is a warning sign of increased intolerance,” the statement read. “We are a country that defends freedom of religion, freedom of expression, and people’s rights to go to school without being fearful or harassed. This is fundamental to who we are.”

He said while it’s concerning to learn that the incident was not real, he was nevertheless encouraged by the response from Canadians last week.

“We’re very proud of the way the country as a whole and society at large came out to speak out against hate crimes,” he said.

Pauline Johnson Junior Public School is seen in this photo.