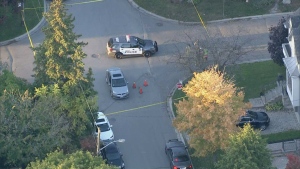 Toronto police say an alleged impaired driver is in custody after pedestrian holding a baby struck near Wilson and Avenue. (CP24)

A driver has been taken into custody for impaired driving after a man holding a baby was struck in North York, Toronto police say.

Emergency crews were called to the area of Haddington Avenue and Avenue Road, south of Wilson Avenue for reports of a collision.

Toronto paramedics said the man was taken to a trauma centre with serious but non-life-threatening injuries.

The child was transported to SickKids, paramedics said.

Police said on Friday evening that the man and the baby did not sustain serious injuries and are expected to be released from hospital.