'An alarming exodus': Ontario nursing sector slammed with staffing shortages as many rethink their careers 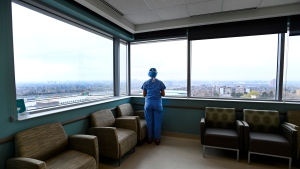 Registered nurse Stephanie Flores, who has been redeployed from the operating room to the intensive care unit, looks out the window in the ICU at the Humber River Hospital during the COVID-19 pandemic in Toronto on Tuesday, April 13, 2021. THE CANADIAN PRESS/Nathan Denette

Birgit Umaigba has been working as a registered Intensive care unit (ICU) nurse in Ontario throughout the course of the pandemic.

With new COVID-19 case numbers dropping and vaccinations on the rise, one might think nurses across the province are now able to take a collective breath, but Umaigba said that isn’t the case.

After working through a pandemic on the frontlines of the health-care sector understaffed and overworked, Umaigba said that nurses are at the end of their rope.

“There are not enough ICU nurses in Ontario and [many] existing, experienced nurses are taking some time off or people are just quitting because of the stress of the pandemic and very, very poor working conditions,” she said.

How many more Nurses need to injure their backs from continously working short-staffed before we get @fordnation to #RepealBill124? How many more need to quit?

A Georgian Bay area nurse who chose to remain anonymous for professional reasons told CTV News Toronto that the hospital he works at is currently going through “a huge staffing shortage.”

“Last week, our ICU had only two nurses for one-on-one care overnight, so they couldn’t leave their unit to get to the lab, etc.,” he said.

“Regular units are just as bad. Our census is full for our 36-bed unit. Night shifts [have had] a single RN, with the remaining nurses managing eight to nine patients.”

He said that he noticed an increase in colleagues leaving their positions starting in the spring and that at least 16 staff have left since, adding that "the replacement process has been slow and painful."

According to recent data by Statistics Canada, the health-care and social assistance sectors had more vacancies than any other sector in January 2021.

Additionally, health-care workers reported working more hours in April 2021 than in April 2020, during the first wave of the pandemic.

“We are taking on more than we can handle because these are our patients, and life-support machines and life-saving medications, so like, you have to,” she said.

An understaffed unit has a direct impact on patient care, Umaigba said.

“If you overstretch yourself, those moments when you're rushing, that's when mistakes happen,” she said.

“You just hope that [two patients] just don't start deteriorating at the same time because you can only be in one place at one time.”

Ultimately, Umaigba said that care can’t be administered efficiently in these conditions.

“Care is delayed. You try to prioritize as much as you can, but care is definitely delayed.”

'Many are rethinking their careers'

“Our nurses have worked so many long hours, without weekends, without really any breathing time for themselves, that many are rethinking their careers,” Grinspun told CTV News Toronto last week.

A recent survey put out by RNAO claimed that the profession is experiencing “an alarming exodus.”

The survey, conducted between Jan. 29 and Feb. 22, captured responses from more than 2,100 registered nurses, nurse practitioners (NP) and nursing students working in Ontario.

Just over 95 per cent of nurses surveyed said the pandemic has affected their work, with a majority of nurses reporting high stress levels and at least 13 per cent of RNs aged 26-35 reported that they were very likely to leave the profession post-pandemic.

“Losing so many nurses at an early stage in their career would have a profound and lasting effect on how our health-system functions so we need to take this very seriously and act immediately,” Grinspun said.

Grinspun said that she thinks the Ontario government needs to focus on both recruitment and retention of nurses.

“At the university level, the province has added 800 additional seats [for nursing students], which will happen this fall,” she said.

“So that's very good, but that takes four years, so it's good, but not good enough.”

Bill 124, introduced by the Ford Government in 2019, is meant to “ensure that increases in public sector compensation reflect the fiscal situation of the province,” the government said.

The Bill limits regual annual salary increases for nurses to one per cent for each 12-month period.

Nurses across the province say that Bill 124 is interfering with their ability to collectively bargain and acquire the pay increases they feel they deserve.

“[Bill 124] strips nurses of their powers. We cannot bargain and it freezes regular salary [increases] to less than one per cent a year,” Umaigba said.

Premier @fordnation, #Bill124 forcibly suppresses the compensation of the very HCWs that you call “heroes.”

For the sake of Ontarians & our health system, IMMEDIATELY exempt nurses and other HCWs from Bill 124.

Sebastian Skamski, press secretary for the Ontario office of the President of the Treasury Board, told CTV News Toronto that Bill 124 “is designed to protect public sector jobs and vital front-line services, which are essential in our fight against COVID-19,” adding that it is inaccurate to suggest the Bill limits salary increases to less than one per cent a year, as nurses can still acquire salary increases through seniority- or merit-based programs.

Earlier this week, an Ontario union representing over 60,000 front-line health-care workers delivered a letter to Premier Doug Ford, calling on his government to “introduce a universal minimum wage of at least $35 per hour for RNs.”

“A new $35 per hour universal minimum wage for RPNs and the elimination of Bill 124 would begin to address the retention and recruitment crisis facing all sectors of the health system,” SEIU healthcare president Sharleen Stewart wrote.

When asked what Ontario’s Ministry of Health (MOH) is doing to improve retention in the nursing field, press security Alexandra Hilkene told CTV News Toronto that the “government is incredibly grateful for the contributions of Ontario’s health care workers and the critical role they have played throughout the COVID-19 pandemic.”

“The government has invested over $52 million to recruit, retain and support over 3,700 more frontline health care workers,” Hilkene said, adding that the MOH “is continuing to provide $4 million annually, as part of $11.2 million annual funding, to the RNAO to administer … grants to nurses for continuing education and professional development.”

“Instead of bonuses, give them a career. Pay for their specialty or to do the ICU course,” she said.

The RNAO has provided a list of recommendations to the Ontario government on recruiting and retaining nurses, including increased support for early and mid-career nurses, increased staffing levels and bolstering admissions to nursing baccalaureate programs by 10 per cent in each of the next four years.

If these recommendations are not taken seriously, Grinspun said that the province will face the repercussions.

“It will translate into a delay of procedures and surgeries, with no doubt, here in Ontario,” she said.

“[This] kind of nursing exodus threatens people’s health and our health system. We must take immediate steps to address that risk.”