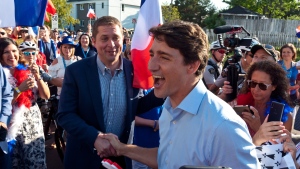 Prime Minister Justin Trudeau shakes hands with Conservative Leader Andrew Scheer while walking with the crowd during the Tintamarre in celebration of the National Acadian Day and World Acadian Congress in Dieppe, N.B., Thursday, Aug. 15, 2019. THE CANADIAN PRESS/Marc Grandmaison

MONCTON, N.B. - Conservative Leader Andrew Scheer is asking Liberal MPs on the House of Commons ethics committee to vote to continue the investigation into the SNC-Lavalin affair, after a scathing report found that the prime minister broke ethics law.

Mario Dion's report said Trudeau's attempts to influence Wilson-Raybould on the matter contravened section 9 of the act, which prohibits public office holders from using their position to try to influence a decision that would improperly further the private interests of a third party.

In a news conference in Moncton, N.B., on Friday, Scheer called on the six Liberal members of the ethics committee to allow the investigation into Trudeau's involvement in the controversy to proceed when the committee meets next week.

Scheer also says he is launching a "grassroots campaign" to ask Canadians to contact the MPs to pressure them to vote on the matter.

Scheer says Trudeau "betrayed the trust" of Canadians and the Liberal party, adding he believes there's more than enough evidence of misconduct to warrant an investigation by the RCMP

Conservative and New Democrat MPs demanded an emergency meeting of the ethics committee to delve into Dion's report.

Trudeau has said he accepts the report and responsibility for what happened, but he disagrees with some of the Dion's conclusions -- most notably, that he shouldn't have had contact with his attorney general over the affair.