Armed Forces being mobilized to help Eastern Newfoundland dig out 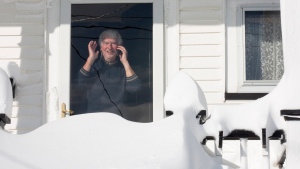 A residents of downtown St. John's, NL on Saturday, January 18, 2020. he state of emergency ordered by the City of St. John's is still in place, leaving businesses closed and vehicles off the roads in the aftermath of the major winter storm that hit the Newfoundland and Labrador capital. THE CANADIAN PRESS/Paul Daly

ST. JOHN'S, N.L. - Armed Forces personnel were deployed Sunday to help Newfoundland and Labrador dig out from the monster blizzard that paralyzed eastern regions of the province with record breaking amounts of snow, as forecasts called for yet more precipitation overnight.

Premier Dwight Ball asked for Ottawa's help on Saturday, as residents of St. John's and other communities on the Avalon Peninsula awoke to drifts that blocked doorways and clogged roads.

Through the weekend, neighbours worked to help one another unbury their vehicles and homes, and to locate necessities ranging from prescription medicines to gasoline.

Meanwhile, Newfoundlanders and Labradorians were among the first personnel boarding Hercules aircraft from Gagetown, N.B., to join with reserves in St. John's.

Cpl. Tiffany Mackey, who grew up in Lewisporte, N.L., said she was eager to begin helping residents cope with the highest single-day accumulation on record - more than 76 centimetres in a single day in the capital.

She'd just finished chatting on her cell phone with her stepmother, a nurse who had just worked for 50 hours at a St. John's hospital during the blizzard.

“We're using our resources to help the people of Newfoundland and Labrador ... with this snow mess,” said Mackey, a medic.

“The fact I can help out and give back is a really good feeling.”

Defence Minister Harjit Sajjan said at a news conference in Winnipeg that two Cormorant helicopters, at least one Griffin helicopter and two Hercules aircraft have been deployed to Newfoundland.

“What you'll see is probably by the end of today (Sunday), you'll have about 150 to 200 personnel on the ground ready to provide support. This could surge up to anywhere between 250 to 300 by tomorrow and the coming days,” he said.

Their expected tasks will include assisting with snow removal, providing residents with transportation to warming or emergency centres, and ensuring the elderly and those with health concerns are cared for.

Some municipalities including St. John's, Portugal Cove-St. Philip's, Conception Bay South and Mount Pearl eased their states of emergency Sunday to make exceptions for some businesses stocking essential needs like medication and gas. People lined up at open gas stations for emergency supplies after days of being snowed in.

St. John's said its state of emergency would remain in place Monday, with exceptions for private snow clearing contractors, gas stations to help with snow removal and pharmacies for emergency medication needs.

On Sunday evening, the Royal Newfoundland Constabulary took to social media to reminded people to stay off the roads.

“Our municipalities are working hard to remove snow to allow emergency services to navigate in case of an emergency. Motorists and pedestrians must stay off the roads while this work is done,” the constabulary shared in a tweet.

Nearby towns of Mount Pearl and Paradise announced that as of Monday, state of emergency conditions would be temporarily lifted during the day, with only emergency vehicles, essential workers travelling to work and snow plows allowed on the roads overnight. Both towns still urged people to stay home unless absolutely necessary.

In the meantime, residents pitched in to assist home-bound neighbours who had reached out for help on social media.

Jess Pynn's west end neighbourhood was buried under snow by Friday evening as she and her fiance dealt with their 13-month-old daughter's unexpected fever.

The family ran out of medicine and Pynn took to a neighbourhood Facebook group asking for help once the skies were clear.

“Within one hour, a lady I had never met before was at my front door with a full bottle of medicine and a box of popsicles,” Pynn said by email.

Her daughter's fever was brought under control by Sunday morning and Pynn said she feels “blessed” to live in a place where neighbours cheerily trek through unplowed streets to help those in need.

“If it wasn't for these kind people, I don't know what I would do,” Pynn said. “There would be absolutely no way we would be able to leave here by vehicle and she probably would have (gotten) a lot more sick.”

A warming centre opened at The Salvation Army Church in Conception Bay South on Sunday, where residents who had been living without power for days but were stuck at home under the state of emergency were permitted to travel for food and warmth.

Reached by phone Sunday afternoon, Maj. Chris Pilgrim with The Salvation Army said one middle-aged married couple had already made it to the centre as organizers prepared for more anticipated arrivals around suppertime.

He said the first visitors had been without power since Friday.

“They woke this morning, they said they could see their breath in the house,” Pilgrim said. “It got quite cold for them.”

Debbie Forward, the president of the Registered Nurses' Union Newfoundland and Labrador, said that some health care workers had been on the job since Thursday night.

“It's been extraordinary,” she said. “It's like something I haven't seen since I was a very young girl.”

Meanwhile, a search resumed Sunday morning for a man who went missing during the weekend storm, with the RCMP asking people in the area of Roaches' Line to check sheds, vehicles and other structures on their properties in case 26-year-old Joshua Wall has taken shelter there.

The RCMP in Bay Roberts said Wall disappeared after leaving his home in Roaches Line, about 70 kilometres west of the capital of St. John's, on Friday to walk through a wooded area to a friend's home in nearby Marysvale.

On Sunday morning, an RCMP spokeswoman said the search area has expanded as police now believe Wall may have made it out of the wooded area and back on to the Roaches' Line roadway, following a reported sighting of a man last night.

Newfoundland Power crews continued working overnight to reconnect about 3,500 customers blacked out during the height of the storm. St. John's International Airport updated its Twitter account Sunday saying commercial flights would not resume until Monday at 8 p.m. evening at the earliest.

And there was one more bit of unwelcome news, as Environment Canada issued a special weather statement for the St. John's area, saying at least 15 centimetres of snow was expected to fall between Sunday night and Monday morning. The forecast was updated with a blowing snow advisory Sunday afternoon.

St. John's Mayor Danny Breen said that as of Sunday single lanes of most roads in the capital had been cleared and major thoroughfares had two lanes open, but more snow removal will be needed overnight.

“It's challenging but our staff are working very hard and we're getting there,” he said.

- With files from Michael Tutton and Joan Bryden.

This report by The Canadian Press was first published on Jan, 19, 2020.