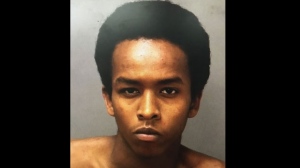 Abdulkadir Handule is seen in this photo provided by Toronto police.

A man who was wanted on a Canada-wide-warrant in connection with the fatal shooting of two men in the city’s Entertainment District in June, 2018 has been taken into custody.

Jahvante Smart, 21, and Ernest Modekwe, 28, were both gunned down outside Cube Nightclub on Queen Street West near Peter Street at around 8 p.m. on June 30, 2018. A 37-year-old woman was also struck by the gunfire but was expected to make a full recovery.

Both Smart, who went by the name “Smoke Dawg,” and Modekwe were well known within Toronto’s music industry.

Smart was an accomplished rapper who formed part of the hip hop and arts group Halal Gang and once toured with Drake. Modekwe, meanwhile, worked as a brand manager for a hip hop collective called Prime.

About two weeks after the shooting police issued an arrest warrant for then 22-year-old Abdulkadir Handule in connection with the murders.

In a press release issued on Friday, police said that Handule was arrested in Burnaby, British Columbia last month on unrelated charges and arrangements were then made to return him to Toronto.

He appeared in court at Old City Hall on Tuesday, where he was charged with two counts of first-degree murder and one count of attempted murder.

Police say that they are continuing to search for a second suspect in connection with the murders. That suspect cannot be identified under the terms of the Youth Criminal

“The Toronto Police Service encourages the young person to contact their lawyer and make arrangements to surrender themselves,” police said in the press release. “If you know the whereabouts of the young person, do not approach them. They are considered armed, violent and dangerous.”