Arrest made in murder of 83-year-old Mississauga woman 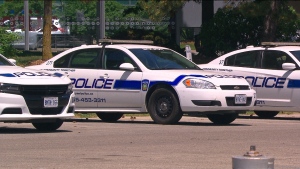 An arrest has been made in the murder of an 83-year-old woman who was found unresponsive at a home in Mississauga last year.

Officers were called to a home in the area of Cawthra Road and Silver Creek Boulevard on the morning of Dec. 21 for a report of an unresponsive woman.

When police arrived on scene, an 83-year-old woman, later identified as Mary Araujo, was found with obvious signs of trauma and was pronounced dead.

On Monday, police announced that 47-year-old Alexander Bates, of Mississauga, was arrested in connection with her death.

Bates, who faces one count of first-degree murder, is currently in police custody while he awaits a bail hearing.

Police have not said if the suspect and victim knew one another.

“Investigators are appealing for witnesses, video surveillance or anyone who may have information concerning this investigation to contact Peel Regional Police Homicide and Missing Persons Bureau,” police said in a news release issued Monday.

Anonymous information can be provided to Crime Stoppers at 1-800-222-TIPS.