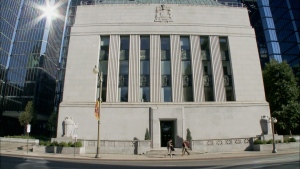 OTTAWA - The Bank of Canada kept its key interest rate on hold Wednesday, but warned higher interest rates are coming to help it reel in inflation from its hottest pace in three decades.

The central bank lined up to kick off what is expected be a series of rate hikes this year starting as early as March as it dropped its forward guidance that it would keep its key policy rate at its rock-bottom level of 0.25 per cent where it has been since March 2020 during the first wave of the COVID-19 pandemic.

The Bank of Canada said indicators now suggest the economy is running at capacity, including a labour market that is by most standards back at pre-pandemic levels, with growth over the last few months stronger than senior decision-makers anticipated.

The rebound is why the bank will no longer promise to keep its key policy rate at what it calls the effective lower bound, as governor Tiff Macklem said rates need to rise to cool inflation back down to the central bank's two per cent target.

He pointed to the rapid spread of the Omicron variant as an economic “wild card” at home and abroad to explain why the bank held off on hiking rates Wednesday.

What will follow is a path of rate increases and potential pauses to gauge impacts.

“How far and how fast - those are decisions we will take at each meeting, depending on economic developments, depending on our outlook for inflation, and what we judge is needed to bring inflation back to target,” Macklem told reporters.

The bank's next scheduled rate call is in five weeks, setting up March as a month of monetary tightening on both sides of the border after the U.S. Federal Reserve also said Wednesday that rate hikes will soon be needed.

“The fact that the Bank of Canada exercised a bit of patience today, to me suggests that they are going to move somewhat more gradually than the market is anticipating,” said RBC senior economist Josh Nye, who expects four rate increases this year.

The Bank of Canada waiting until March for a first hike will have minimal impacts on the economy and inflation, said Royce Mendes, managing director and head of macro strategy at Desjardins.

Hiking on Wednesday without warning, after having in December said no to a rate increase until at least April, would have dealt a larger blow to the Bank of Canada's credibility, Mendes said.

“That is a safer way to operate than rushing a rate hike,” he said.

The Bank of Canada warned in its updated economic outlook that consumers would continue to feel the pinch from faster price growth, particularly at the grocery store, with headline inflation likely to creep above five per cent for the first quarter before easing by the end of the year.

Inflation for 2022 is forecasted to clock in at 4.2 per cent, up from 3.4 per cent in the bank's October forecast, and faster than what the consumer price index registered for all of 2021.

The longer inflation rates stay high, the more likely Canadians will believe they will stay elevated over the long-term, which the Bank of Canada worries could lead to runaway price growth.

“Amid a strong recovery with robust demand, striking labour shortages, and inflation at 30-year high, a rate hike in March will be all but necessary to tame inflation and inflation expectations,” said Tu Nguyen, an economist with accounting firm RSM Canada.

The central bank estimated the economy grew by 4.6 per cent in 2021, down half a percentage point from its previous forecast in October, and now projects growth in real gross domestic product in 2022 at four per cent, down from 4.3 per cent.

Part of the downgrade is due to governments cutting spending earlier than expected, and supply-chain issues that will have broader implications for economic activity and prices.

Carolyn Rogers, the bank's new second-in-command, said Omicron will also weigh on domestic growth, but the effects should be short-lived because of high vaccination rates and businesses learning to adapt to restrictions.

“If that proves to be true, we think an economic rebound is around the corner,” said Rogers, the bank's senior deputy governor.