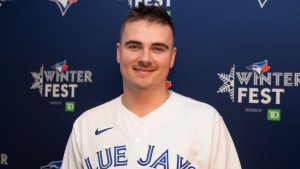 A 24-year-old catcher for the Toronto Blue Jays was arrested and charged last week after allegedly exposing himself in a Dunedin, Florida parking lot.

Cpl. Chuck Skipper of the Pinellas County Sheriff’s Office says that at 2:13 p.m. on Feb. 7, officers were called to a parking lot on Patricia Avenue in Dunedin, Fla., the municipality where the Jays hold spring training and which houses their farm team.

He said they were called for a report of a “subject seen sitting inside an SUV exposing himself.”

“When deputies arrived, they made contact with Reese McGuire, who was cooperative and did not deny the allegations,” Skipper wrote in an email to CTV News Toronto.

McGuire, who debuted with the team in 2018, was charged with Exposure of Sexual Organs, a first-degree misdemeanor in the state.

He was released at the scene of the incident and will appear in court in Clearwater, Florida on March 16 to answer to the charge.

“On the court paperwork, McGuire’s employment is listed as ‘Blue Jays’,” Skipper wrote.

The team said Wednesday they were “aware of the recent police incident” involving McGuire.

“He has been in communication with the Blue Jays and we are working to gather more information,” a spokesperson said. “Out of respect for the legal process, neither he nor the club will comment any further at this time.”

The offence McGuire was charged with carries a maximum penalty of one year confinement or a $1,000 fine.