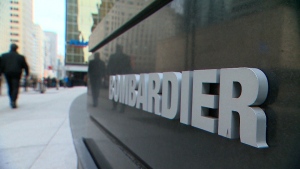 MONTREAL - Bombardier Inc. will cut 2,500 workers from its plane-making division as demand for the company's main source of income - private jets - falls amid a recession and feeble travel demand.

The cuts will see 1,500 layoffs in Quebec and 400 in Ontario, as well as 500 in Mexico, 40 in the United States and about 60 outside North America, according to a Bombardier spokesman. Half of the cuts will be completed by the end of the month, with the second half occurring throughout 2020.

The announcement Friday comes less than three months after Eric Martel took over as CEO from Alain Bellemare, under whose watch the plane-and-train maker moved to sell its commercial aircraft and rail divisions to prop up a balance sheet weighed down with billions in debt.

Aviation division president David Coleal said “that if the market improves, we will assess measures to reintegrate our colleagues,” according to an internal memo obtained by The Canadian Press.

“It is very unfortunate to have to resort to these reductions. However, we have reached the limits of our ability to maintain employment levels from before the COVID-19 crisis,” Coleal said.

In a statement Friday, Bombardier stressed the “extraordinary industry interruptions and challenges” caused by the pandemic, which have set off a forecasted 30 per cent year-over-year decline in business jet deliveries industry-wide.

The union representing Bombardier machinists called the company's decision “incomprehensible when Bombardier could have avoided this wave of layoffs by availing itself of the Canada Emergency Wage Subsidy.”

“We are extremely disappointed that Bombardier refuses to make the CEWS program accessible to all of its workers,” said David Chartrand, Quebec co-ordinator of the International Association of Machinists and Aerospace Workers.

A slashed workforce will lighten the overhead of a company grappling with share-price lows and credit downgrades and whose order book no longer supports a humming factory floor as clients rethink the value of a private plane purchase in an economic downturn.

The Montreal-based company, once the world's third-largest aircraft manufacturer with a range of jet and turboprop aircraft, has pinned its future on business jets.

Now Bombardier will reduce production of the luxury product - the Global 7500 is listed at US$73 million - by roughly 20 per cent, according to forecasts by analyst Benoit Poirier of Desjardins Securities.

“Those companies that acquire business jets do so when they have extra money to spend or they can make a business case for those private planes, and it's more than likely that this year this kind of investment will be postponed until the future,” said Jacques Roy, a professor of transport management at HEC Montreal business school.

However, longer-term demand may rise in step with wariness of the health risks associated with air travel, he said. “Companies will find it more convenient to fly their executives or six or seven engineers...on a private jet in North America.”

Roy pointed to the PGA Tour's reported plan to charter jets and fly players and caddies from event to event due to health concerns.

“To me this is a good example why business jets are a good market. This COVID-19 pandemic will in a way incite those who can afford to fly on private jets to do so.”

Bombardier and analysts expect demand for the Global family of jets, its largest, to prove particularly resilient. “Those people who buy more expensive toys can afford it regardless of the economy,” Roy added.

The company recently sold its commercial jet businesses, which supplied planes to airlines, and agreed to sell its rail business to French rail giant Alstom SA for US$8.2 billion, subject to approvals. Bombardier said last month that the deal, now undergoing regulatory scrutiny in the European Union, remains unaffected by the COVID-19 crisis.

On Monday, it closed the sale of its CRJ regional jet program to Mitsubishi Heavy Industries Ltd. for US$550 million. A final vestige of its role in commercial plane-making departed with the sale of Bombardier's remaining stake in the A220 commercial jetliner program to Airbus SE in February.

The business aircraft segment had initially expected double-digit revenue growth this year with 160 unit sales in 2020 amid a US$16.3-billion backlog and had begun to ramp up production when the pandemic hit in March.

Bombardier said it expects to record a special charge of US$40 million in 2020 as a result of the job cuts. Further information will be provided when it delivers its second-quarter financial results on Aug. 6.

This report by The Canadian Press was first published June 5, 2020.