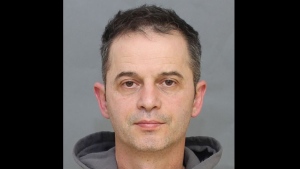 Emilio Guglietta, 52, of Brampton is shown in a Toronto police handout image.

A 52-year-old Brampton man was charged with voyeurism after a woman who answered his social media ad for a free massage last week allegedly found a camera recording her as she dressed.

Toronto police say that on Saturday, Jan. 25 at 3:04 p.m., they were called to New Age Healing Centre at 4430 Bathurst Street for a complaint.

A 32-year-old woman who told police she answered an online ad offering a free massage said that she received a massage from a man and then “discovered an electronic device recording” her as she put her clothes back on.

Officers detained a man at the scene who they identified as Emilio Guglietta.

He was charged with one count of voyeurism and released on a promise to appear.

He is next scheduled to appear in court at 1000 Finch Avenue West on March 5.

Investigators say they searched his home in Brampton and seized computer equipment and other electronic devices.

They say they believe there are other victims who have not yet come forward.

Emilio Guglietta, 52, of Brampton is shown in a Toronto police handout image.