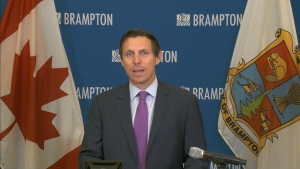 Brampton Mayor Patrick Brown says he continues to worry about the impact of events in banquet halls on COVID-19 transmission in his city, something he expressed to Ontario's Premier this week.

"Banquet halls still leave us very nervous," he said Wednesday. "Any large gatherings where people celebrate a milestone event, people get more comfortable as the night wears on," he said, adding it isn't a guarantee that everyone keeps their distance or their mask on throughout a night at a banquet hall.

The province moved earlier this month to reduce the size of private gatherings to no more than 10 people indoors and 25 people outdoors, but events in businesses were exempted from this restriction

Brown said he told Premier Doug Ford about his concern about banquet halls in a call this week.

Peel Region Chief Medical Officer of Health Dr. Lawrence Loh said he is asking people in Peel to limit their close contacts to "their household and essential supports."

Peel has been one of three hotspots in the province for COVID-19 growth, reporting between 60 to 100 cases per day in September.

Meanwhile, Brown said the number of charges laid in connection to illegal gatherings has fallen to its lowest level of the pandemic.

Last week, only one charge was laid in the whole city of Brampton due to an illegal gathering.

Earlier in the summer, there was one week where 120 charges were laid.

"I think the public is really starting to appreciate the significance of COVID-19," Brown said.