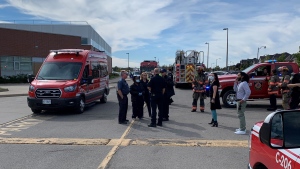 Firefighters are shown outside a Brampton secondary school during an unknown substance investigation on Tuesday. (Twitter/@BramptonFireES)

A Brampton school was briefly evacuated on Tuesday afternoon after a unknown substance was reportedly sprayed inside the building, police say.

Emergency crews were called to Louise Arbor Secondary School near Bramalea and Father Tobin roads at around 12:35 p.m.

Peel paramedics said that up to five patients were assessed at the scene but were not ultimately transported to hospital.

Brampton Fire then gave the all clear at around 2 p.m., noting on Twitter that there was no threat to public safety.

“We have investigated the unknown substance and ventilated the area,” they said.

Police initially described the unknown substance as an “irritant,” though no other details have been provided.

The incident was contained to the building, according to Brampton Fire.

Police say that an investigation is ongoing.