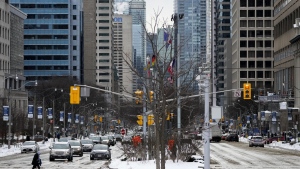 The view from Queen's Park of University Avenue, where major hospitals provide health-care for people, is shown as pedestrians cross the street in Toronto, Friday, Feb. 4, 2022.  THE CANADIAN PRESS/Nathan Denette

OTTAWA - Federal spending on health care and elderly benefits are set to rise at a faster clip over the next 12 months than previously planned under forecasts the parliamentary budget officer warns don't account for looming budget promises.

Health transfers are calculated to grow by at least three per cent each year, but the budget office says cash to provinces is set to rise by 4.8 per cent year-over-year. The $2.1 billion increase will bring federal spending on health care to $45.2 billion in the coming fiscal year that starts in April.

Provinces have been asking for billions more annually to pay for the provincially run systems that have been stretched by the COVID-19 pandemic and an aging population.

While the provinces argue they don't have the fiscal capacity to heap on billions more in spending because of the pandemic, an analysis released Thursday suggests the lower levels of government are in better financial shape.

The study from the Canadian Centre for Policy Alternatives estimates that six provinces will have a budget surplus this year or next, and could be in better shape if provinces choose to collect enough taxes to cover spending.

David Macdonald, a senior economist at the centre who wrote the report, says revenues roared back faster for provinces than expected, and federal coffers took on the bulk of pandemic-related expenditures.

He argues that if provinces use their surpluses to cut taxes, rather than invest in health care or long-term care, it could undermine their argument of the need for more federal spending in those areas.

“There's certainly a better case to be made, if you do take these surpluses and small deficits to reinvest in long-term care and health care, to then go to the federal government and say, 'Look, we're doing our part, time for you to do your part,”“ Macdonald said.

“It's going to be a real question of how we spend the money, not that the money isn't there for a lot of provinces for the next couple years.”

“It's time the government offered health-care workers more than praise. They need to make the necessary investments in our health-care system so that heath-care workers and patients across the country have the support they deserve,” NDP Leader Jagmeet Singh said in a statement Thursday.

The Liberals won't negotiate a change to the funding formula for health transfer until after the pandemic, but have suggested that any extra dollars would have strings attached and require provinces to meet outcomes or benchmarks for care.

A report released Thursday by the C.D. Howe Institute cautions against upping spending indiscriminately, saying that a 2006 transfer boost appears to have increased costs rather than improved services.

Report authors William Robson, Don Drummond and Alexandre Laurin argue the Liberals should use the coming budget to invest in growth-related measures and increase federal sales taxes to help pay off the hefty bill from the pandemic.

In the scenario the trio outlined, the budget would return to balance by 2025.

The federal bill for seniors' benefits is set to increase by $6.7 billion, or 10.9 per cent, from the previous fiscal year, partly because of high inflation rates to which the value of payments are pegged.

Total spending on the old age security program next year is projected to hit $68.3 billion and includes $740 million for a one-time payment to seniors who saw a clawback in benefits after they received emergency aid at the start of the pandemic.

Giroux projected that spending on old age security, which currently is responsible for $1 in every $7 dollars of federal spending, will hit $86.3 billion by 2027.

This report by The Canadian Press was first published March 10, 2022.