Business outlook soft even before shock of COVID-19, Bank of Canada says 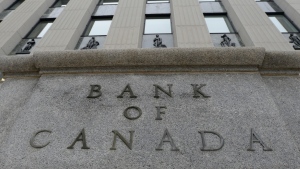 The Bank of Canada is seen Wednesday September 6, 2017 in Ottawa. THE CANADIAN PRESS/Adrian Wyld

OTTAWA -- The Bank of Canada says workers were feeling upbeat about job prospects, while employers felt otherwise in the weeks before COVID-19 delivered a shock to the Canadian economy.

The survey of consumer expectations suggests more people anticipated searching for a new job and expected they would quickly find something new, while fewer thought they would lose their jobs.

Household spending expectations continued to edge up faster than expectations for wage growth, which the bank says suggests consumers by mid-February weren't becoming more cautious in their spending.

Over the last two weeks, more than two million people have applied for employment insurance benefits, a dramatic spike from what the program normally sees.

And starting today, Canadians who don't qualify for EI will be able to apply for a new, $2,000-a-month emergency benefit the federal government expects to cost $24 billion.

The outlook for the rest of the year has seen an equally dramatic drop from just a few weeks ago, and the surveys from the Bank of Canada today provide a pre-pandemic picture of consumers and businesses.

Results from the business outlook survey suggest business sentiment had softened in most regions before the pandemic intensified.

Much of the business softness sentiment emanated from the country's oil-producing regions where companies were generally less optimistic, pulling back on capital spending and hiring plans as they watched the price of oil fall.

Companies told the central bank they expected the economic shock from low oil prices to be worse than what hit the sector in 2015 and the 2008 economic crisis. As one data point, capital spending was being cut by 30 per cent compared with 2019.

The reason, the bank says, was over concerns that financing was becoming harder to come by for companies that were also anticipating "a bottoming-out in the sector rather than a negative shock."

The belief was the benchmark price for crude, known as West Texas Intermediate, would be between US$30 and US$35 a barrel. The price to start the week was closer to US$28 a barrel.

By mid-March, restaurants, hotels and other service industries had seen a collapse in sales, either closed or expected to soon, and were "drastically laying off staff or reducing staff hours in line with operations." Others, the bank noted, were moving to food delivery and online sales to find new ways to earn money.

Grocery retailers and related transportation companies saw their sales reach "unprecedented levels" as workers were being told to stay at home.

This report by The Canadian Press was first published April 6, 2020.