Businesses evacuated after fire breaks out at industrial building in Schomberg

Crews remain at the scene of a massive fire that broke out at an industrial building in Schomberg early this morning.

Firefighters were called to Aerospace Metal Finishing on Proctor Road, near Highway 9 and Highway 27, at around 5:30 a.m. for a reported fire.

Flames and heavy smoke could be seen billowing from the building shortly after the fire was reported.

When crews arrived on scene, a primary search was conducted and no employees were found inside. 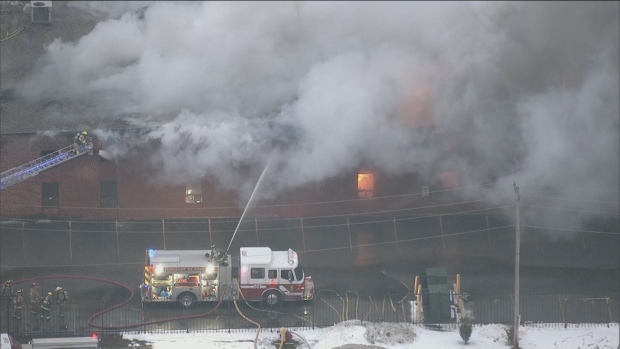 “Employees were already on scene and so they provided us with a bit of info early on (about) what was burning in the building,” Jason Ballantyne, a spokesperson for King Township, told CP24 at the scene on Monday morning.

About 45 firefighters from King Township, Bradford West Gwillimbury, and New Tecumseth were on scene at the height of the blaze.

Nearby businesses were evacuated as a precaution and Highway 9 was also shut down between Leonard Road and Highway 27 due to the smoke and high winds.

“Right now we’ve evacuated the industrial area,” Ballantyne said. “We’ve blocked off Highway 9 so people can’t drive through the smoke that is actually being blown to the north.”

By Monday night, Highway 9 and Highway 27 had reopened.

Businesses within the Schomberg business park are also allowed to reopen, except for those located on Proctor Road, Dillane Drive and Magnum Drive, the municipality said Monday night.

In a news release, King Township said that air quality testing has revealed that there is no threat to public safety.