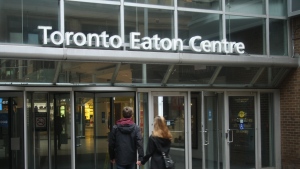 The federal privacy commissioner says Cadillac Fairview, the company that owns the Toronto Eaton Centre, Fairview Mall and a slew of other shopping centres across the country, used facial recognition software to improperly collect millions of images of shoppers at malls across Canada – including four in the GTA and another in Hamilton.

A report released this week by the federal, Alberta and BC privacy commissioners found that the company embedded small, inconspicuous cameras inside their digital information kiosks at 12 malls across Canada and used facial recognition technology without their customers’ knowledge or consent.

While the company maintained that no personal information was collected because the photos were quickly deleted after being analyzed, the report found that was not the case.

According to the Office of the Privacy Commissioner (OPC), the company used video analytics to collect and analyze sensitive biometric information of shoppers, such as estimated age and gender.

“Shoppers had no reason to expect their image was being collected by an inconspicuous camera, or that it would be used, with facial recognition technology, for analysis,” Privacy Commissioner of Canada Daniel Therrien said in a statement Thursday. “The lack of meaningful consent was particularly concerning given the sensitivity of biometric data, which is a unique and permanent characteristic of our body and a key to our identity.”

Investigators found that after the images were deleted, the sensitive biometric information continued to be stored in a centralized database by a third party.

“Cadillac Fairview stated that it was unaware that the database of biometric information existed, which compounded the risk of potential use by unauthorized parties or, in the case of a data breach, by malicious actors,” the privacy commission said in a release.

The company argued that shoppers were made aware of the activity via decals placed on shopping mall entry doors that referred to their privacy policy. However, the privacy commissioner found that the move was “insufficient.”

Responding to the report in a statement Thursday, Cadillac Fairview said the Anonymous Video Analytics (AVA) software was designed to assess the amount of foot traffic at a given site and categorize the general demographics of visitors anonymously.

“The OPC has determined the complaint to be resolved. We have accepted and implemented all the Privacy Commissioner’s recommendations, with the exception of those that speculate about hypothetical future uses of similar technology,” the company’s statement read. “We currently have no plans to use the technologies in question.

The company said it takes the concerns of its visitors seriously and moved quickly to address them. It also noted that the program was never designed to recognize anyone.

“The AVA software in our digital directories was being used exclusively to detect the presence of a human face and, within milliseconds, assign the face to an approximate age and gender category. It did not store any images during the pilot program, and it was not capable of recognizing anyone.”

The investigation by the various privacy commissions was launched in 2018 following media reports about the Anonymous Video Analytics (AVA) technology installed at wayfinding kiosks in the malls.

According to the report, Cadillac Fairview disagreed with the findings, but stopped using the technology in July 2018 and deleted all information associated with the project aside from that required for possible legal reasons.

While the commissioners ruled that the issue had been resolved, the report says they continue to find it “concerning” that the company has not committed to obtaining express opt-in consent from shoppers if it uses the technology again in the future.

The report also noted that the company disputes the finding that it collected personal information via the Anonymous Video Analytics technology.

Critic: Shoppers weren’t given a choice

The Canadian Civil Liberties Association issued a complaint to the privacy commissioner about Cadillac Fairview’s practice back in 2018.

Speaking with CP24 Thursday, Executive Director Michael Bryant, who is also the former attorney general of Ontario, said the case highlights the importance of involving people where their privacy is concerned.

“The major concern is that they're doing it without people's consent,” Bryant told CP24 in an interview. “You know, it may not be much, but if I click something on my phone or on my desktop to indicate that I agree to share my information with a particular website, that may not be the greatest privacy protection in the world but at least you get to decide whether or not you're going to continue with the website. In this case they don't give us a choice. They're not giving the people who walk into the malls the choice.”

He said keeping biometric data unwittingly obtained from shoppers also raises questions about how it may be used. He said shoppers might not agree if they thought their information might be used, for example, to help companies profit or if they thought it might potentially be shared with law enforcement agencies.