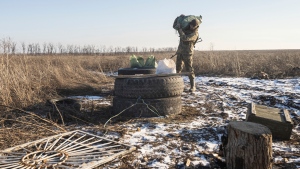 OTTAWA - The Ukrainian Embassy in Ottawa is calling on the Trudeau government to provide weapons to Ukraine's military, impose further sanctions on Russia and extend and expand the Canadian military training mission of its forces.

The blunt Ukraine statement was sent to The Canadian Press by its embassy after Prime Minister Justin Trudeau announced on Friday that Canada was giving Ukraine a $120-million loan to help bolster its economy as it faces a hostile buildup of Russian forces on its borders.

Trudeau billed the financial contribution as one of the “top things” Ukrainian officials asked for in their discussions when Foreign Affairs Minister Melanie Joly visited their country this week.

The Ukrainian statement says that “Canada's firm political position in support of Ukraine can be reinforced” by the “extension and expansion of the Canadian military training mission” known as Operation UNIFIER, providing the defensive weapons and equipment, and “imposing severe sectoral sanctions.”

It called Joly's visit part of the “active” and supportive international diplomatic efforts toward Ukraine, noting the two countries have “a special partnership” and are celebrating the 30-year anniversary of their diplomatic relationship this week.

“In light of a serious threat of another wave of Russian aggression we have been in consultations with NATO member countries, including Canada, about means to strengthen Ukraine's defence capacities. We are confident that ongoing talks with our Canadian partners will deliver the results soon,” it says.

The Ukraine statement says 200 men and women of the Canadian Forces have trained 32,000 Ukrainian military personnel to NATO standards. The mission is set to expire at the end of March and though Trudeau has spoken supportively of it, he has not formally extended it.

“That is the win-win for both sides as Canadians get the real combat experience from Ukrainians. In addition to the existing training centres, we would like the Canadian mission to be present also in other locations throughout Central and Southern Ukraine,” it says.

Russia has positioned about 100,000 troops across Ukraine's borders along with tanks and other heavy artillery, stoking fears across Europe of an invasion, something Russia has denied.

“We have hundreds of Russian tanks and armoured vehicles deployed along the Ukrainian border and in the occupied parts of Ukraine's territory. Facing the risk of a further Russian invasion, we need to defend our land. The U.K. and the U.S. have already shipped the military equipment and we would appreciate if Canada follows suit,” says the statement.

It says Ukraine's new Territorial Defence Forces are in place to counter that threat, but to “better equip them we highly seek to receive the critical supplies from our friends in Canada.”

And on the question of sanctions, the statement has a simple message: more, please.

“It is essential for Canada to impose severe sectoral sanctions swiftly as a way of raising the costs of any military or hybrid action contemplated by Russia. We welcome Canada's support for a comprehensive multi-tier deterrence package, consisting of political, economic and security measures which effectively demotivate Russia from escalation.”

Canadians of Ukrainian descent have expressed frustration that Joly travelled to Europe with nothing concrete to offer on sanctions, arming the Ukrainian military, or extending the Canadian military training mission.

“Today, Justin Trudeau failed to announce lethal defensive weapons for Ukraine, the use of Magnitsky sanctions, or RADARSAT imagery,” Conservative MP James Bezan, who has been banned from travelling to Russia, said Friday. “We are facing the prospect of a full invasion of Ukraine by Russia and Justin Trudeau is sitting on the fence.”

Trudeau said Friday that Joly discussed the loan to “help support Ukraine's economic resilience” during her Ukraine visit and that the government was exploring other options to provide financial and “other support.”

“The conversations that our foreign minister had with Ukrainian officials, including the Ukrainian president, stress that we're happy to be there to reinforce the resilience and the strength of Ukraine's economy faced with Russian destabilization, including economic destabilization,” said Trudeau.

Blinken told reporters after the meeting that there were no breakthroughs but he said both sides have a clearer understanding of their positions.