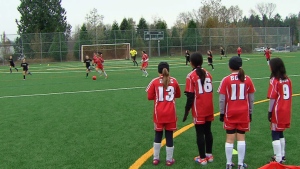 But the 31-year-old from Toronto stuck with her sport of trampoline, beating odds that, according to a recent report by Canadian Women & Sport, see one in three Canadian girls drop out of sports during adolescence.

“It was through sports that I went through phases where body image was a challenge, but it was also through sport that I learned to value what my body was able to do for me in that, even though it wasn't necessarily the same as my competitor, it was part of my strength,” MacLennan said.

The results were bleak. And at this rate, Canada won't see parity between girls and boys for at least the next 15 years.

The study found participation levels for Canadian girls are much lower than boys, and there is a dramatic dropout rate with one in three girls leaving sport by late adolescence - a number that has barely budged since the 2016 report, according to Allison Sandmeyer-Graves, the CEO of Canadian Women & Sport.

“That is saddening to see, because, particularly for girls, whether it's at a recreational level or competitive level, there's a ton of skills and value that sport can bring with respect to leadership and resilience, a lot of skills that you would can take off the field of play into other aspects of your life like education and careers.”

“And (sport) can be a valuable tool . . . whether it's physical health or mental health or social health, there's a lot of conversations that you can bridge through sport and activity, if you have the proper mechanisms in place.”

The federal government set a target last year of achieving gender equity at all levels of sport by 2035. Canada isn't on track to hit that target, said Sandmeyer-Graves.

“I remember at the time, it was like '2035, gosh, that's so far away,”' she said. “But when you are talking about something that is as systemic as this, that has so many different components to it, 2035 is going to be here before we know it.”

While Canadians in general are living less active lifestyles, Sandmeyer-Graves said, the numbers are particularly alarming for females. Currently, as many as 62 per cent of Canadian girls aren't participating in sport.

Among the barriers that affected girls' continuation in sport, one in three listed low confidence, negative body image, perceived lack of skill, or poor perceptions of belonging and feeling unwelcome.

“Many of barriers to participation (boys and girls) face would be quite similar,” Sandmeyer-Graves said. “But the fact that there is such a gender difference (in dropout rates) really underscores the fact that we need to pay particular attention to how we're designing and delivering sports for girls and for young women.”

MacLennan said she was fortunate to grow up in an active family. She was encouraged to try a variety of sports.

“So from a young age, building out those fundamental skills, but also exposing me to sports that I wouldn't necessarily have the chance to do in school, and so kind of giving me the chance to explore and find something that I really connected with and became passionate about,” MacLennan said. “Put me on a field with a soccer ball, and I'm not particularly strong. But put me in the air and I'm a lot more comfortable.”

Girls who aren't introduced to sports at a young age are far less likely to be physically active as adults.

“If you are exposing kids at a younger age to those fundamental skills, I think that they become more comfortable and confident with a lot of different movement patterns,” MacLennan said. “And then try to introduce them to as many activities as possible, whether it's through watching the Olympic Games and the variety of sports there, or local programming, that can be really important too.”

Sandmeyer-Graves said there is reason for optimism.

“Anecdotally there's more attention being paid to women's sports,” she said. “Government commitments obviously have been quite strong over the last while. There are lots of initiatives happening in sports all across the country. People are reviewing their policies, we are seeing improvements at least at the national level of more women on the boards. So there are things happening. They might just not be translating yet into these large statistical analyses,” she said.

She hopes the Rally Report's takeaway for people already working on achieving gender equity is to keep going. And for those who haven't started paying attention, “there's no time like the present.”

“We need to start if we're going to see the kind of change we want to see frankly - I don't know at this point - within a few generations if we're lucky,” she said. “There's stuff happening, and we don't want the big numbers to obscure that fact. It's just not happening at scale, and it's not enough to turn this ship yet.”

The Rally Report: Encouraging Action to Improve Sport for Women and Girls was conducted with IMI International, and collected data from over 10,000 Canadians aged 13 to 63.