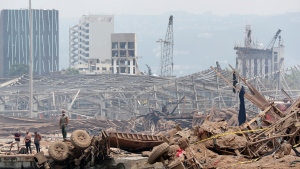 People are pictured at the devastated site of the explosion in the port of Beirut, Lebanon, Thursday Aug.6, 2020. French President Emmanuel Macron came in Beirut to offer French support to Lebanon after the deadly port blast.(AP Photo/Thibault Camus, Pool)

OTTAWA - Canada is joining France and other countries in emphasizing the need for economic and political reform in Lebanon over the long term as it looks at immediate ways to help the country following this week's deadly explosion in Beirut.

Canada has so far pledged $5 million in emergency aid after Tuesday's blast in Lebanon's capital, and International Development Minister Karina Gould said the federal government will continue to help the country when it begins to rebuild.

Yet Gould also repeated long-standing calls from the international community for economic and political change to address the underlying problems that have left Lebanon heavily indebted - and which some have blamed for the explosion.

For many Lebanese, Tuesday's giant blast was the last straw after years of corruption and mismanagement by a political elite that has ruled for decades.

The blast is believed to have happened when a fire touched off a stockpile of 2,750 tons of highly explosive ammonium nitrate that authorities left sitting in a warehouse for years - despite a customs official's repeated warnings.

“We are ready to provide assistance to Lebanon,” Gould said during a news conference Thursday in Ottawa when asked about concerns with corruption and poor governance in the country.

“However, we recognize that that has to come with significant fiscal and political reforms to ensure that that assistance goes to benefiting the lives of the Lebanese people, and that is something that we have been very firm in.”

Canada isn't alone in highlighting those concerns following the explosion, which killed more than 130 people and injured thousands more. It also destroyed Lebanon's main port and caused damage to much of its capital, leaving many residents homeless.

There have been widespread pledges of international aid to Lebanon, which was already mired in a severe economic crisis that has crippled its ability to rebuild from the blast.

However, the global community has been reluctant to offer direct support to the notoriously corrupt and dysfunctional government.

French President Emmanuel Macron announced during a visit to Beirut Thursday that France will organize a conference with European, American, Middle Eastern and other donors to raise money for food, medicine, housing and other urgent aid.

But he warned Lebanon's political leadership that he wouldn't give “blank cheques to a system that no longer has the trust of its people.” He called on them to create a “new political order.”

Macron, whose country was once the colonial ruler of Lebanon, also promised a “clear and transparent governance” so that the aid goes directly to the population and aid groups.

Lebanon's various political factions, including the Iran-backed Hezbollah militant group, have ruled the country since the 1975-1990 civil war.

Almost all the country's public institutions are divided up among the factions, which use them as patronage generators for themselves and their supporters.

Little actual development is put into the institutions and anything that requires joint action often becomes mired in bickering. As a result, even basic services like electricity and trash collection are in a shambles.

The first $1.5 million in emergency assistance from Canada is flowing through the Canadian Red Cross to its Lebanese counterpart. Gould said officials are now assessing the situation in co-ordination with other countries for the rest.

However, she did indicate that the money would not be given to the Lebanese government.

Meanwhile, Gould said Canada's embassy in Beirut managed to escape the explosion relatively unscathed and will reopen on Monday to begin offering consular assistance to Canadians in need.

While the federal government previously evacuated thousands of Canadians from Lebanon in 2006 during a war between Hezbollah and Israel, Gould could not say whether the government expected a massive influx of people from Lebanon this time around.

“We are still assessing the situation,” she said. “We haven't received a huge number of requests for assistance, about 64 at this point in time, and those people are being assisted through our consular support services here in Canada.”

Gould referred questions about whether Lebanese-Canadians will be able to bring relatives in crisis to Canada to Immigration Minister Marco Mendicino.