Canada's defence minister says China is not an adversary 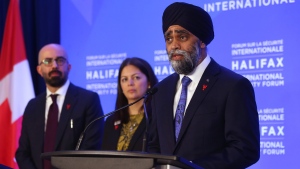 Harjit Singh Sajjan, Minister of National Defence, speaks, as Peter Van Praagh, President Halifax Security Forum and Paz Magat, director of Peace With Women Fellowship, look on, during the opening news briefing before the start of the Halifax International Security Forum in Halifax on Friday November 22, 2019. THE CANADIAN PRESS/Tim Krochak

HALIFAX - Canada's defence minister said Friday China is not an adversary despite the arbitrary detention of two Canadians as he hosts a major international security forum that will honour pro-democracy protesters in Hong Kong.

Defence Minister Harjit Sajjan said at the Halifax International Security Forum that the arrests of ex-diplomat Michael Kovrig and businessman Michael have strained relations. Sajjan said there is a need for Beijing to return to rules based international order, but he said there is still co-operation on trade.

“We don't consider China as an adversary,” Sajjan said. “We do have two Canadians that have been arbitrarily detained in China and we ask China for their expeditious release and that's extremely important to us.”

Beijing detained Kovrig and Spavor last December in an apparent attempt to pressure Canada to release Meng Wanzhou, a top executive at Chinese tech giant Huawei. The daughter of Huawei's founder was arrested Dec. 1 at the request of U.S. authorities who want her on fraud charges.

China has also sentenced two other Canadians to death and suspended imports of Canadian canola. Relations between Canada and China are at their lowest point since the Tiananmen Square massacre.

Halifax International Security Forum that Forum President Peter Van Praagh said it is time to recognize that China has a different worldview and describes Beijing as an adversary and strategic competitor.

“This is a big country that does not share our values and yet there are Canadians and Americans who do a lot of business and it does create jobs and so what are we willing to surrender in terms of our own values in co-operation with China and where does that line get drawn?” Van Praagh said.

In its 11th year, the Halifax International Security Forum has attracted top defence and security officials from Western democracies. Halifax International Security Forum Board Member Cindy McCain will present the John McCain Prize for Leadership in Public Service to the people of Hong Kong on Saturday. China has condemned moves by U.S. lawmakers to throw their support behind the protesters in Hong Kong, threatening “strong countermeasures.”

Trump said Friday that he told Chinese President Xi Jinping that efforts to quash the pro-democracy protests in Hong Kong would complicate negotiations for a U.S.-China trade deal.

Chinese new ambassador to Canada, Cong Peiwu, meanwhile urged Canadians to speak out loudly against the “violent criminals” protesting for more freedom in Hong Kong, citing the risks to Canadian citizens and companies there.

“What happened in Hong Kong has nothing to do with democracy or human rights,” said Cong, who arrived in Ottawa two months ago.

“We do hope the Canadian side will send out a clear message to ask those rioters to stop the violence.”