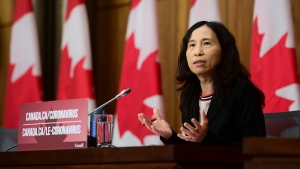 OTTAWA -- Canada is on the cusp of its hitting its first national vaccination target, but chief public health officer Dr. Theresa Tam says the Delta variant of the virus that causes COVID-19 might mean the country has to up its game again.

Federal modelling done in April and May suggested that if 75 per cent of eligible Canadians had at least one dose of a COVID-19 vaccine, and 20 per cent had two, provinces could safely begin easing restrictions on public movement without overwhelming hospitals again.

When 75 per cent of eligible people are fully vaccinated, the modelling suggested personal measures like physical distancing and wearing masks could also begin to loosen.

Tam says the variants used to develop those models didn't include Delta, which is the most infectious one tracked in Canada to date, believed to cause more severe illness, and is expected to become the dominant variant circling.

She says knowing that one dose is proving to be less effective against Delta, but two doses are doing very well, it is more important than ever to aim for full vaccination as quickly as possible and probably aim for even higher than 75 per cent.

Canada is set to reach part of the first target -- 75 per cent of eligible people having their first dose -- sometime in the next 24 hours, and 20 per cent with both doses likely by Sunday.

There will be enough delivered to get two doses to 75 per cent of eligible Canadians by mid-July.