Canada to give $25,000 to Canadian families of Flight PS752 victims 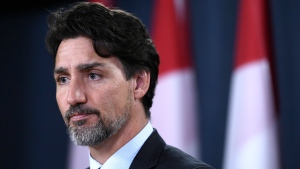 Prime Minister Justin Trudeau speaks during a press conference in Ottawa on Saturday, Jan. 11, 2020. Trudeau says Iran must take full responsibility for mistakenly shooting down a Ukrainian jetliner, killing all 176 civilians on board, including 57 Canadians. THE CANADIAN PRESS/Justin Tang

OTTAWA - Prime Minister Justin Trudeau says Ottawa will provide $25,000 to the families of each of the 57 Canadian citizens and 29 permanent residents who died when Iran shot down a Ukrainian passenger jet last week.

Trudeau says the money is intended to cover the cost of funeral arrangements or travel, and it's on top of an earlier commitment to waive fees and speed up processing times for visas for those affected by the crash.

“This is a unique and unprecedented situation, because of the international sanctions placed on Iran and the difficulties that that imposes on these families,” Trudeau told a news conference in Ottawa Friday.

“I want to be clear: we expect Iran to compensate these families,” he said, but noted that could take time.

“I have met them. They can't wait weeks. They need support now.”

[IN PHOTOS: Some of the victims of the Ukrainian airliner crash who have been identified so far]

Meanwhile, Foreign Affairs Minister Francois-Philippe Champagne was in Oman to meet with his Iranian counterpart, Javad Zarif, to talk about the shooting down of the Ukraine International Airlines flight PS752, which killed 176 people last week.

That meeting comes after Canada and four other countries with citizens aboard the downed airliner came up with a list of demands for Iran, which includes pressing that country to co-operate with the investigation.

The countries are all asking that Iran punish those responsible and compensate the families of victims.

It has been just over a week since one - and possibly a second - Iranian surface-to-air missile took down the passenger jet minutes after takeoff from Tehran's international airport.

The Canadian Press has independently confirmed at least 90 victims with ties to Canada, many of them students and professors returning after spending the December break visiting relatives in Iran.

In a rare sermon during Friday prayers, Iran's supreme leader called the downing of the civilian airliner a bitter accident that saddened Iran and made its enemies happy.

Ayatollah Ali Khamenei said Iran's international rivals have seized on the crash to question the country and its armed forces.

He also attacked the United States for its killing of a top Iranian general, which was a factor in putting Iranian air defences on high alert, and called President Donald Trump a clown.