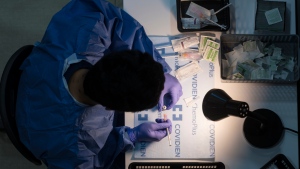 A dose of the Pfizer-BioNTech vaccine being prepared at the COVID-19 vaccination clinic at the University of Toronto campus in Mississauga, Ont., on Thursday, May 6, 2021. THE CANADIAN PRESS/ Tijana Martin

OTTAWA - A homegrown mRNA vaccine for COVID-19 shows promising results in its first small trial and its maker is hoping to test it directly against the vaccine from Pfizer-BioNTech.

Calgary-based Providence Therapeutics says its vaccine produced no serious adverse events and developed good antibodies against COVID-19 that “compare favourably” with the two mRNA vaccines already on the market from Pfizer and Moderna.

The Phase 1 trial included 60 healthy adults between 18 and 64, with more than half of them receiving two doses of the vaccine, four weeks apart. The results have not yet been peer-reviewed.

Sorenson said the next step is supposed to be a Phase 2 head-to-head trial that would test the effectiveness of Providence against Pfizer. Most vaccines in Phase 2 have been tested only against a placebo, but Sorenson said in a pandemic he feels it is unethical to give someone a placebo when they could otherwise be vaccinated.

But to do the trial, Providence needs 500 doses of Pfizer, which he said neither the company nor the National Research Council has been willing to provide.

A spokeswoman for Pfizer said Thursday the company's focus is only on getting the vaccine to meet an “urgent public health need” and will only sell its vaccine to the federal government.

“As such, we are not providing supply of our vaccine to third-parties to study the vaccine in comparative trials,” said Christina Antoniou.

Pfizer is the main component of Canada's vaccination campaign to date, accounting for two-thirds of the deliveries as of this week.

A spokesman for Innovation Minister Francois-Philippe Champagne said the government has informed Providence Ottawa is willing to help fund its Phase 2 trial, and continue to work with the company.

“Minister Champagne has spoken directly with Providence Therapeutics' CEO and the chair of their board of directors to discuss our continued support for their work as they bring their vaccine candidate through the early stages of development,” said John Power.

A spokesman for the National Research Council said it doesn't have access to doses of Pfizer or Moderna to help Providence, but is discussing the request with other departments that might be able to help, including Health Canada and the Public Health Agency of Canada.

Sorenson said Providence is also discussing with the World Health Organization the possibility of doing a Phase 3 trial in a developing country.

Sorenson said if Health Canada supports both trials, they could be wrapped up by the end of the year. But Sorenson said he doesn't feel supported by Ottawa and has threatened to take the business outside the country.

The company has production agreements in place that should be able to produce 200 million doses a year, he said.

Providence is one of six Canadian companies that received funding from the National Research Council for COVID-19 vaccines that were in early stages of development.

The company received $4.9 million last October to help fund its Phase 1 trial. It also received $5 million in January from the next-generation manufacturing supercluster to help scale up its manufacturing of mRNA.

The only Canadian-made vaccine among the seven procured by Canada for COVID-19 to date is Medicago's plant-based protein vaccine, which is now in a Phase 3 trial and could be ready for mass production before the end of the year.

Medicago received $173 million in October to push its vaccine forward as well as an undisclosed sum for a contract to provide Canada at least 20 million doses if it is approved. Some of it will be made in Canada, but production will also take place in the U.S.

A lack of domestic drug manufacturing hurt Canada's vaccination program, particularly early on, and Prime Minister Justin Trudeau said the government is intent on fixing that ahead of the next global health crisis.