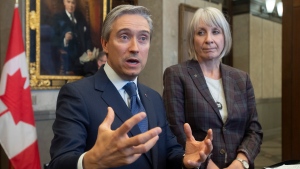 Canadians who have spent weeks on a coronavirus-stricken cruise ship in Japan will board a government-chartered plane to take them home Thursday evening, the foreign affairs minister says.

Thousands of passengers who'd been taking a cruise on the Diamond Princess have been stuck aboard the ship, docked in Yokohama while the illness dubbed COVID-19 has sickened hundreds.

Japanese authorities will test Canadian passengers for the virus before allowing them to leave the ship, where they'll be taken by bus to the airport to board the chartered plane, Francois-Philippe Champagne said Wednesday.

Anyone who wants to come home and has been cleared to fly will be checked out again at Canadian Forces Base Trenton, in Ontario, before being moved on to quarantine at a hotel and conference centre in Cornwall, Ont., a few hundred kilometres east.

But those passengers who have tested positive for COVID-19 will remain in Japanese health facilities, Champagne said.

Forty-seven of about 250 Canadian passengers had been struck by the bug at last count, according to Canadian authorities.

“The best approach to dealing with Canadians who have been infected with the coronavirus in Japan is for them to be treated locally,” Champagne said in Ottawa after question period Wednesday.

Health Minister Patty Hajdu added that not only would transporting sick patients home to Canada pose a risk to others on the same plane, a long flight without the necessary health care on board could cause an infected person's condition to deteriorate.

COVID-19 is thought to have an incubation period of about two weeks, and the evacuees will wait out that period in quarantine once they arrive home to make sure they don't get sick and spread the illness in Canada.

But if patients have tested negative for the virus, have had no contact with infected patients and show no symptoms, Canada's chief medical officer has the discretion to release passengers from quarantine early, Hajdu said.

The much-criticized quarantine of the cruise ship was to end later Wednesday. The Diamond Princess's 542 virus cases are the most in any place outside of China, and medical experts have called its quarantine a failure.

Canadian officials were waiting on final authorization from those in Japan before the plane ferrying people home is able to take off, according to Champagne, who added that the government wanted to make sure every Canadian on board the ship had been contacted and was fully aware of the options.

He said the plane landed in Japan after some unforeseen technical issues prior to takeoff Tuesday. The Canadian evacuation had previously been scheduled for earlier in the week.

One healthy Canadian passenger said she's eager to go home and the departure date's being moved is “discouraging.”

“We'd like to hear what the explanation might be instead of being left in the dark once again,” said Trudy Clement of Callander, Ont.

Lolita Wisener of Red Deer, Alta., who is also looking forward to coming home, said she was not happy.

“The smiles are getting a little bit more brittle now, you know,” she said via Skype.

The “hope” they had when it was announced last Saturday that the government would take Canadians from the Diamond Princess is now fading, she said.

“It's a good thing we're not drowning, eh?” Wisener said.

“I'm starting to feel bad for me.”

Evacuees from the centre of the coronavirus outbreak have spent nearly two weeks at CFB Trenton under quarantine are preparing to return home.

They were placed in isolation after they returned to Canada from Wuhan, China. The government is now working to help them make their final travel plans once they are released from quarantine.

- With files from Jordan Press and The Associated Press