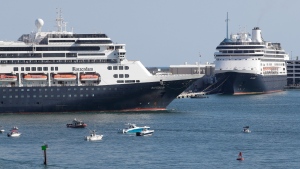 The cruise ship Rotterdam, left, passes the Zaandam, right as it prepares to dock at Port Everglades, Thursday, April 2, 2020, in Fort Lauderdale, Fla. The Zaandam and Rotterdam cruise ships carrying guests and crew with flu-like symptoms will be allowed to dock in Florida's Port of Everglades Thursday, ending a nightmarish voyage disrupted by the coronavirus pandemic.(AP Photo/Wilfredo Lee)

Canadian passengers aboard a Florida-bound cruise ship said it was still unclear Friday when they would get to come home, or even reach shore, as their counterparts aboard two other vessels began their journey back to Canada.

The Coral Princess was still heading north to Florida on Friday afternoon. Torontonian Gary Lyon said he and his fellow passengers were told the estimated time of arrival of early Saturday had been pushed back.

But even once they get to Fort Lauderdale, he said, uncertainties abound.

"The first hurdle is getting permission to dock," Lyon said. "And then of course, to be disembarked and rushed as quickly as possible to the airport to a flight taking us directly back to Canada. That would be our goal."

Global Affairs said it understood that the Coral Princess, carrying 97 Canadian passengers and two Canadian crew members, was still due to dock in Florida on Saturday.

"Disembarkation plans for Canadians on board are in progress," a spokesperson for the ministry said.

Lyon and his wife have been aboard the ship since March 5, and haven't been on dry land in nearly three weeks, he said. The ship has been looking for a place to dock since March 13, but no country has allowed it.

Passengers were able to walk around and access reduced services on the ship until Tuesday, he said, when they were confined to their cabins.

Up to that point, Lyon said, a few dozen Canadians had been meeting regularly to check in with one another. Now, they've found other ways of keeping each other up to date.

"We've got an email chain for everybody who wants to be linked," he said. "We have a Facebook page as well, for Canadians," he said.

So far, operator Princess Cruises said a dozen people on board have tested positive for COVID-19, while others are experiencing flu-like symptoms.

Most people diagnosed with COVID-19 experience mild or moderate symptoms, such as fever and cough, and the majority of those who contract the virus recover.

For some, however, including Canadians aged 65 and over, those with compromised immune systems and those with pre-existing conditions, the illness can be much more severe.

Lyon said he knows of a few Canadians who are suffering flu-like symptoms, but isn't sure whether they've been tested for the coronavirus. He said it's reasonable to expect a few people to come down with the flu or a common cold on a trip this long anyway.

But he conceded that his loved ones back home may be a little more concerned -- a feeling he said was reciprocated.

"We worry about your situation and how this is affecting everyone," Lyon said. "We understand that it's not easy what you folks are going through either. We're just in a different situation, but we're all under the cloud of this virus."

Sanford Osler of North Vancouver said he and his wife have spent some of their time on the Coral Princess worried for both themselves and the others on board.

"The last three weeks have been something of an emotional roller coaster in terms of where we will be able to get off and the health of others onboard," he wrote in an email. "We are anxious because of the uncertainty about what will happen in Fort Lauderdale."

Osler said he wonders whether they'll even be allowed to disembark once they reach shore, as passengers on the MS Zaandam and MS Rotterdam were.

Those ships, operated by Holland America Lines, received the necessary approvals on Thursday and were able to disembark in the evening.

On Friday, Foreign Affairs Minister Francois-Philippe Champagne said they were on their way home.