Catholic, French teachers back in talks with government as strike looms 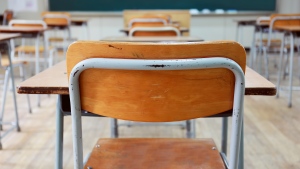 An empty classroom is seen in this undated file photo. (Source: iStock, DONGSEON_KIM)

TORONTO - The unions representing Ontario's English Catholic teachers and those in the province's French system were back at the bargaining table Wednesday, two days ahead of a joint strike by all four major teacher groups.

The Ontario English Catholic Teachers' Association has only had one other day of talks with the government since negotiations broke down in early January, and the union representing French teachers has had sporadic bargaining dates over the past few months.

All four major teachers' unions, including those representing elementary and secondary teachers, are planning a joint, provincewide strike on Friday, which will shut public schools across Ontario.

OECTA is also planning rotating, one-day strikes starting next week if they can't make progress toward a deal.

Education Minister Stephen Lecce has expressed frustration with the strikes, a tactic all four unions have been employing.

“Two million students on Friday should be in class,” he said Wednesday. “The government's position quite clearly is that these strikes are having adverse impacts on kids, on their families and on their communities.”

Lecce has signalled flexibility on class sizes - one of the most contentious issues in ongoing negotiations, particularly for secondary teachers. He has said he would rather make further moves on class sizes than on compensation for teachers.

The government announced last spring it would increase average high school class sizes from 22 to 28 and require students to take four e-learning courses to graduate.

Lecce has since offered to instead increase average high school class sizes to 25 and require two online learning courses.

All of the teachers' unions are asking for around two per cent in annual salary increases, while the government won't budge beyond offering one per cent. It passed legislation last year capping wage hikes for all public sector workers at one per cent for three years. The teachers' unions and several others are fighting the law in court, arguing it infringes on collective bargaining rights.