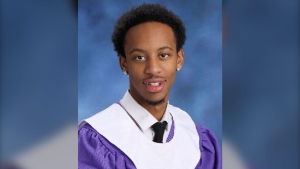 Tyjjuan Kidd-Bailey, 20, is seen in this photograph. (Toronto Police Service)

A man has been charged with second-degree murder in connection with a shooting in North York that left a 20-year-old man dead.

Emergency crews were called to Duncanwoods Drive, located near Finch Avenue West and Islington Avenue, around 6 p.m. on Jan. 17 after receiving a report of a shooting.

When officers arrived at the scene, they found a man suffering from a gunshot wound. The victim, who has been identified by police as 20-year-old Brampton resident Tyjjuan Kidd-Bailey, was pronounced dead at the scene.

Police also said that officers saw a man running from the scene of the shooting.

A suspect was taken into custody on Thursday in connection with the case, investigators said.

Deandre Cadougan, of Toronto, has been charged with second-degree murder and is scheduled to appear in court on Friday.