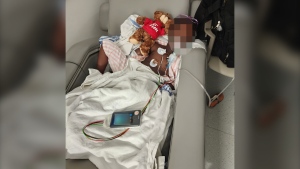 A four-year-old child with Down syndrome spent about 40 hours in an Ontario emergency room after coming down with a serious respiratory illness, something her mother calls “completely ridiculous” and “unacceptable.”

It was around 2:30 a.m. on Nov. 9 when Jasmine, a resident in the Woodbridge, Ont., area, said she called 911. Her young daughter’s fever would not break and she was throwing up every hour.

CTV News Toronto has agreed to only use Jasmine’s first name to protect her identity.

The pair was transported to Cortellucci Vaughan Hospital, a new facility that opened up to patients in 2021. The hospital has said in recent weeks it has been grappling with an influx of “sicker” patients, which has resulted in it operating at over capacity, particularly in their pediatric unit.

“We didn't wait long before we got to triage,” Jasmine told CTV News Toronto on the phone. “I think I saw a doctor within an hour or so of showing up in (the emergency department).”

But that’s when Jasmine says the process slowed down. She said the doctor ordered blood work and X-rays, which showed the child had pneumonia, and the family was told the four-year-old would have to stay overnight.

Around 8 a.m. they were moved from the examination area to the hallway, where they waited for about four to five hours.

“She got tired and was really sleepy. We had nowhere to lie down so I had to use two chairs and some blankets and make a bed for her,” Jasmine said. During this time, she said a nurse did attend to her daughter, including when she threw up on the floor. 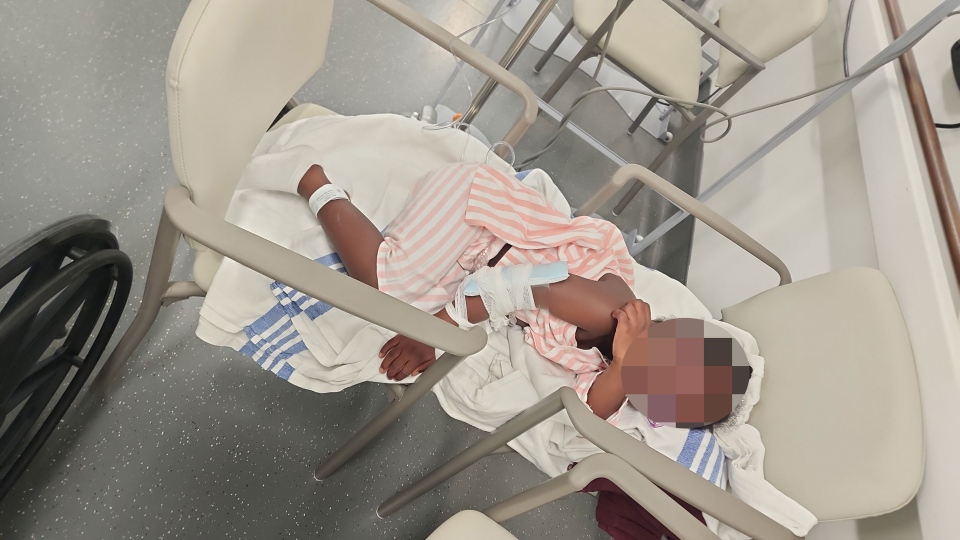 It wasn’t until a different staff member saw the makeshift bed that the family was moved into a shared room with another teenager. Jasmine said the room had a recliner chair for each patient, separated by Plexiglass.

By this point, she says, her daughter’s oxygen levels had dropped.

“They had to put a mask on her face,” Jasmine said. “It's while we were in that room the test came back that she is positive for RSV.”

Respiratory syncytial virus (RSV) is a common respiratory virus that particularly affects young children. An increase in the illness across Canada, in addition to a rise in influenza and COVID-19 cases, is contributing to an overburdened health-care system, particularly in pediatric hospitals.

After learning of the diagnosis, Jasmine said she and her daughter were moved once again to another room within the emergency department, where the child was finally given a bed. Jasmine slept in a spare chair.

Around 6 p.m. on Nov. 10—about 40 hours after they first called 911—the family was transferred to a bed in the general ward of the hospital.

“At one point I asked them to take us to SickKids (Hospital) because, I'm like, ‘This is ridiculous,’” Jasmine said. “They said to me that Sick Kids didn't have any beds.”

Children’s hospitals across Ontario have been reporting a significant rise in patients due to respiratory viruses, with SickKids saying earlier this month that it was putting some surgical procedures on hold to “preserve critical care capacity.”

In a Nov. 11 statement, the hospital said its ICU census has been at least 127 per cent above capacity for several days.

Ontario has a total of 112 intensive care beds for children.

‘OVERCROWDED IS AN UNDERSTATEMENT'

Cortellucci Vaughan Hospital is a $1.7-billion facility that opened up in February 2021 under Mackenzie Health. It has about 350 beds and its website says the hospital is “home to specialized programs including Woman and Child, Inpatient Mental Health and Inpatient Stroke.”

Jasmine said while the staff was responsive and continually working, there were just too many patients to deal with and the hospital felt “disorganized.”

“For the whole time that I was there, my heart was in my hands honestly,” she said. “It's not on the doctors. It's not on the nurses. If I was working that job I would quit.”

She noted there appeared to be a lot of staff members who were students and she was told they could not make any decisions about her child’s care.

In a statement, a spokesperson for Mackenzie Health said its emergency departments and urgent care centres have “seen higher patient volumes than ever before.”

“We’re operating over capacity and many of the people coming to us for care are very sick – including an increasing number of children,” they said.

“We’re doing our best to triage patients as quickly as possible. We aim for less than two hours to initially see a doctor and we have been able to maintain that on average, but there have been days recently where it is unfortunately longer. Sometimes patients might also need medical imaging scans or blood work that gets sent to the lab – these take time and may contribute to what feels like an even longer wait time.”

Mackenzie Health also said because patients are “coming in sicker,” many need to be admitted, contributing to a longer wait for inpatient care.

“Even though we’ve increased capacity in our pediatric unit, the Emergency Department is currently acting as a surge space when there are more children needing care than we have beds available. At times we have surged above 250 per cent of our admitted pediatric bed capacity," they said.

“Long wait times and caring for patients in temporary surge spaces are not the experience we want for our patients, but they are a reality right now.”

Wait times in Ontario emergency rooms reached a record high in September, with patients spending an average of 21.3 hours waiting to be admitted.

The provincial Liberal Party even called that month “the worst September on record extending all the way back to 2008.”

Health Minister Sylvia Jones told CTV News Toronto in a statement the government is in “constant contact” with pediatric hospitals to ensure patients receive the care they need. She also said that hospitals have been directed to use adult hospital capacity to support the pediatric units.

“We are taking a team Ontario approach, and have increased hospital capacity across the board by adding over 3,500 new critical care, acute and post-acute hospital beds,” Jones said Tuesday.

“We know emergency department volumes have been increasing year over year. We are not okay with the status quo. That is why we have invested in health human resources, freed up beds across the province and expanded 911 models of care to address wait times as demand rises heading into the fall and winter season.”

For Jasmine, she said concrete action needs to be taken not only to reduce wait times, but also to alleviate the burden on overworked health-care professionals.

“Forty hours in the ER was just completely ridiculous for a four-year-old. It’s unacceptable.”