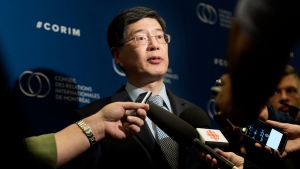 MONTREAL - China's ambassador to Canada is threatening what he called “very firm countermeasures” should Parliament adopt a motion calling for sanctions against Chinese leaders.

Ambassador Cong Peiwu reacted today to comments by two Conservative senators who are planning to table a motion next week calling on the Trudeau government to impose sanctions on China for its alleged human rights abuses.

Cong told reporters in Montreal that if the Senate and House of Commons were to adopt such a motion, it would be a serious violation of Chinese domestic affairs.

Canada-China relations have been strained since Dec. 1, 2018, when RCMP arrested Huawei executive Meng Wanzhou at Vancouver's airport, at the request of the United States.

Days later, two Canadians - Michael Spavor and Michael Kovrig - were detained in China on allegations of undermining national security, and the two men continue to be held in that country.