City asks for patience as snow clearing moves to side streets 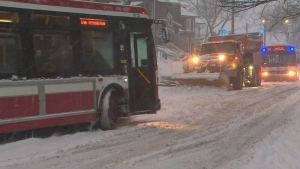 Snow has made the drive treacherous in the city. Several vehicles getting stuck while climbing up snow-covered hills.

City of Toronto officials are asking residents to be patient as crews move from main thoroughfares and highways and onto side streets in neighbourhoods.

Though it wasn’t the levelling experienced this weekend in eastern Newfoundland, Toronto’s snowfall total on Saturday topped early estimates by two centimetres, amounting to 17 centimetres.

The snow cover brought with it as many as 250 collisions across the GTA, and major delays for surface transit throughout the region.

“You’re going to see plows on residential streets all morning, and then they’re going to start salting those streets,” he said. “For the most part the major roads and expressways are ready to go and for sidewalks, the ploughs will be out salting a bit.”

Holmes says if your street isn’t cleared, wait until after 2 p.m. to call 311 and report it.

“Continue to be patient today, levels of service have been met and the cleanup continues,” Holmes said.

Environment Canada says Sunday will see a slight chance of some flurries.

The mercury fall from – 9C Sunday evening to a low of – 15C overnight. It will feel more like – 23 with the windchill.

Snow has made the drive treacherous in the city. Several vehicles getting stuck while climbing up snow-covered hills.